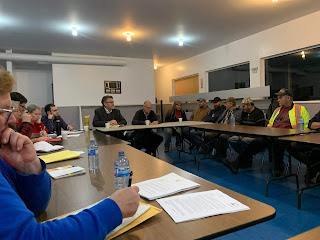 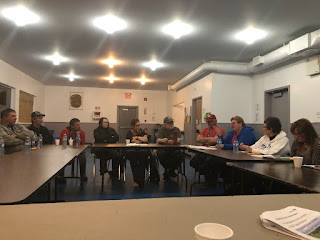 Dougald Lamont and I met with a concerned group of ranchers in Crane River on October 13th.   The ranchers felt betrayed by the actions of the Pallister government which is making changes to the management of Crown Lands in a way that is very detrimental to their own livelihood and to the future of their ability to raise cattle in the area near Crane River and in nearby areas near St. Rose du Lac and in the Interlake.   The ranchers were supported by a representative from the Manitoba Beef Producers, Diane Riding.

A second major concern was the increased costs of the lease by about 350% over the next two years.   This is a very rapid increase, particularly for producers with marginal land who have had to face both drought and flood conditions in the last few years.   This increase would put a number of the long term producers out of business.  It was noted that for some producers the marginal nature of the land was such that 90% is swamp.  Another said his land had more cattails than hay.  This is not the same as high quality Crown Land available elsewhere.   For a number of the producers, they were sacrificed in 2011 when these areas were flooded to save Winnipeg, and in one year since then.   They feel they are now being sacrificed again and that this time it will have a severe adverse impact on their local community.  They have put their heart and soul into investing in the land and in their community and they are disappointed, angry and frustrated by the actions of the Pallister government. Diane Riding of the Manitoba Beef Producers was very supportive of these ranchers and she said a lot of the input from the Manitoba Beef Producers was not adequately listened to by the government when it made its decision to change the system.

We also heard from a number of ranchers who had come from elsewhere because they saw Manitoba as a land of opportunity.   They now feel the opportunity is being lost and their future is being taken away.   We also heard that, contrary to the claims of the Pallister government, the changes being imposed on them will make it considerably more difficult for young ranchers to enter the system and begin raising cattle.

We listened carefully to what we heard and we have decided to support the ranchers in our efforts in the Legislature, and to ensure people elsewhere in Manitoba have a better understanding of the implications of the Pallister government’s policies on people and on communities.