March 25, 2019
March 21, I asked in Question Period about the lead contamination in Weston and North Point Douglas.   The history of lead contamination goes back to a survey report from 1979 which found that "lead concentration in tree foliage and surface soil from sampling locations in close proximity to the secondary smelters was frequently tenfold the lead concentrations found to accumulate from normal motor emissions in the Winnipeg area."  Weston Elementary School was specifically mentioned as being in an area of high lead concentrations (up to 1245 ug lead per gram of soil).   The 1979 report said specifically "It can be anticipated that lead will accumulated to the same degree in other plant tissues and soils such as those found in vegetable gardens."  In addition the 1979 report noted that "elevated lead levels have been found in neighbourhood children and employees of secondary lead smelters within the city and much concern has been raised."


The most recent (January 2019) report entitled Winnipeg Soil Survey Fall 2018 (https://www.gov.mb.ca/sd/eal/registries/5998soilsurvey/2018_Winnipeg_Soil_Survey_Setup.pdf)
reports that levels of lead in the soil at Weston Elementary School continue to be higher that the Canadian Council of Ministers of the Environment (CCME) Environmental Quality Guidelines.  Twenty of twenty-five samples at the school were above CCME guidelines with the three highest being 372, 375 and 446 ug lead per gram soil.  I asked the Minister of Sustainable Development two questions about what individuals living in the area should do with respect to growing and eating vegetables.  Unfortunately, the answers provided by the Minister were not very specific as to what residents should do, or where they should go for specific advice.


In my third question, I asked the Minister for Sustainable Development whether she would undertake to look carefully at the health status of individuals living in the affected areas.   To help her in this effort, and to provide background information to reinforce the importance of such as study, I provided data showing higher levels of certain mental health and brain conditions in the postal code areas containing Weston School and in the North Point Douglas area where lead levels were also found to be high.  Sadly, the Minister went over the top in suggesting I was making false allegations, when I was just presenting the results of a FIPPA - results provided by the government's own Department of Health.  The results of the FIPPA findings shown below speak for themselves.  As I have indicated before, and reinforce now, the findings do not demonstrate that high lead levels were the cause of the higher levels of the mental and brain health conditions.   Rather they are only sufficient to argue strongly that the government needs to do additional work to look at the relationship between lead levels and mental and brain health conditions to see if they are related.

Lead Contamination in Soil  - Testing of Residents' Gardens
Hon. Jon Gerrard  (River Heights): Madam Speaker, Janice Clarke lives near Weston School. She and others are concerned that the minister's report, tabled last week, shows that levels of lead in the surface soil at Weston School are still too high and are still above acceptable levels.
Her home is next door to one in which the garden and its soil were remediated a number of years ago. However, her home never had its garden remediated. She would very much like to grow and eat vegetables, but is uncertain about whether it is safe.
Would the minister provide for the testing of gardens like Ms. Clarke's, who lives in an area with proven high lead levels where there is uncertainty as to their current status?
Hon. Rochelle Squires (Minister of Sustainable Development): Our government takes the issue of lead in the natural environment very seriously, as do many other jurisdictions throughout North America that are challenged with this very task that we are facing today of increased exposure of lead in our natural environment. That is why we felt–important to release a lot information. We've released the 1988 report that was covered up by a former NDP Premier, Howard Pawley. We released the results that were covered up by the former NDP government in 2008 and 2009 that revealed higher incidents of lead in the constituencies of Point Douglas, Minto, Wolseley and Logan, and we will continue to report on this as we're moving forward and working to ensure safety for all Manitobans.
Madam Speaker: The honourable member for River Heights, on a supplementary question.
Mr. Gerrard: Madam Speaker, there's lots of evidence of high lead levels, but there's no advice in terms of what people should actually do.
For many years, the presence of high lead levels in Weston and north Point Douglas has been dealt with in a way that's unsatisfactory in that residents have been uncertain about their status and continue to be concerned about their situation.
Is the minister going to handle the current situation so that residents will have greater clarity with respect to how to proceed? For example, whether they can or should plant gardens? What criteria should residents use in making a decision about planting gardens and growing vegetables?
Ms. Squires: I do have to address some of the inaccuracies put forward by this Liberal member in his preamble.
We have taken strong action. In fact, last July our department knocked on the doors of people who lived in the constituency of St. Boniface to alert them to the exceedances of lead in their yards and gave them information on how to protect them–their gardens, what to do with the vegetables. We've been out no less than three public conferences that we have held in conjunction with public health to make sure that people have the right information they need to keep themselves safe if they are in a zone that is–got exceedances of lead in the natural environment.
We are taking action. Where the former NDP government failed, we're getting it right.
Madam Speaker: The honourable member for River Heights, on a final supplementary.
Mental and Physical Health
Mr. Gerrard: The minister is not tabling the information today or distributing it. Miss Clarke, has hasn't seen this.
Madam Speaker, lead is known to have adverse affects on the brain and mental health and on physical health. I table today information which indicates that Weston and north Point Douglas areas have a higher incidence of various mental health conditions than the rest of the city of Winnipeg.
Will the government commission an in-depth study to look at the relationship between the high lead levels found in Weston and north Point Douglas areas, and the mental and physical health status of people and their children living in these parts of Winnipeg?
Hon. Rochelle Squires (Minister of Sustainable Development): Well, I think it's absolutely shameful that this member would come up and make false allegations and make very unsubstantiated health claims for people who are dealing with real mental illness, real issues, and try to purport that that is a result of lead in their soil. That is absolutely unsubstantiated. We've had absolutely no public health officers, no medical officers, no one is saying that but the member for River Heights, and he should get up and apologize for putting such hope–inaccurate information on the record just to fear monger and score political points. Shame on him.


The information which I tabled is below.  I tabled this information to show that these matters need to be looked at further.  In my experience, people would like the facts.   The Minister is perhaps trying to imply that these areas are low income areas of Winnipeg and that is why there is a high rate of certain brain and mental health conditions.  But what if the reason were the lead contamination?  If the reason was the lead contamination, it would provide a different view of the situation and suggest a different approach to addressing the issues of children in these areas. 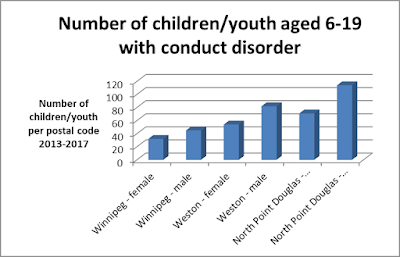 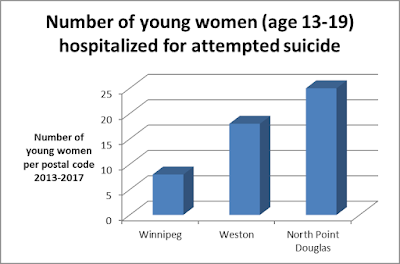 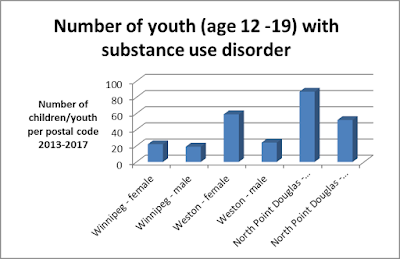 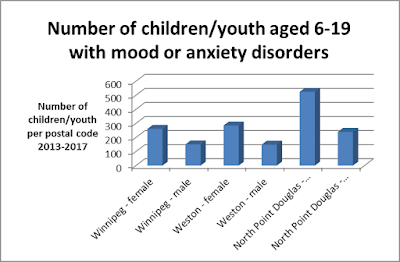