Solar Power in Africa – It is important because energy is the mother of all problems in Africa. 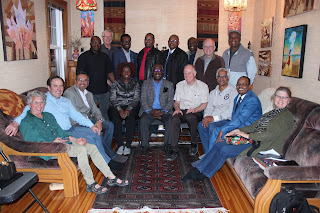 On May 2, 2018 Naomi and I hosted a workshop at our home to talk about the pivotal importance of solar power in Africa.   With a shortage of energy in many communities in Africa, people continue to cut trees in their area and burn firewood to cook food.  This can be replaced with solar power so that trees and forests can grow and sequester carbon, helping the local and the global environment.   We explored the situation together with Manitobans who have come from different parts of Africa.

For the most part reforestation policies have failed.   Legal and illegal logging have also drastically reduced forests.  In Cameroon, about 50% of the forests have been lost through logging. In Nigeria, 80% of the forest resources have been lost in the last five decades, in part because of the dependence on forests for energy.   In Madagascar, slash and burn has been used to clear forests for agriculture.   The problem of deforestation is made worse as productive forested or agricultural land is desertified.   This is more critical on the southern edge of the Sahara Desert, the Sahel region.  The result is that the Sahara Desert is continually expanding southward – causing greater and greater problems for countries like Berkina Faso and Benin.

If no action is taken to reverse deforestation soon, it will be progressively more difficult.  Even subsistence farming is becoming more difficult with deforestation and desertification leading to land degradation, loss of biodiversity and disruption of the basic food chain.  The situation is critical with 80% of the African population still dependent on the land for survival.

With continuing erosion of the topsoil and with the often torrential rainfall of tropical Africa which washes away topsoil in areas where there are not forests, the present situation has led to increased instability, increased vulnerability and endemic hunger in many African communities and countries.

The result of all this has been a decision by people for "flight or fight"  The flight has occurred to cities or to other countries - in particular we are seeing a massive migration of Africans to Europe.  Cities are not equipped for so many people, and even there they are often dependent on firewood harvested in rural areas which continues the vicious cycle of deforestation, land degradation, desertification, loss of biodiversity leading to more flight or fight.  Fighting is occurring too often in affected regions of Africa - from Somalia and Eritrea in the horn of Africa to the Republic of the Congo and Mali in the south and west.  The conflicts are unlikely to stop until there is a better local source of power to support communities and to halt this vicious circle.  That source is almost certainly primarily solar power.

Following Mussie Tesfagiorgis's opening remarks there were comments from many who attended.  These comments included:

- One of the problems is that timber is being exported.  In cities in Nigeria you can see loads of timber going to Asia.  This compounds the problem of loss of forests.

- One country, Senegal, is a good example of forward thinking.   About 50% of their energy supply is now solar energy.  Ghana has also done well with 60% of their energy now alternative energy (wind or solar).

- There have been considerable advances in battery systems to store energy produced by solar power.  In Australia, they are developing a huge battery system.

- Sierra Leone is behind..  There is a lot of potential.  But right now, when people are poor, they don't follow the laws and they go out and cut firewood because it is the only option they have.

- In Kinshasa, most of the trees in the city are gone.   This has multiple effects including resulting in higher temperatures for people in the city because of the lack of shade trees.

- Supplying energy to rural area through solar power could reverse the movement from rural areas to cities.

- In Pakistan they have a very successful model for subsidizing solar panels for farmers.

- There was a lot of discussion about how to get increased solar power to Africa.  Financial institutions have the potential to play an important role.   One suggestion was the establishment of an African Energy Bank which would have the specific goal of transforming access to energy in Africa.  It was commented that one approach would look for contributions to set up such a bank from the rest of the world.   If it were successful, it would have the potential to provide the microfinancing to get solar into communities throughout Africa, and to dramatically reduce the number of environmental refugees.  It would also enable improved connectivity with increased access to smart phones and improved entrepreneurial opportunities as well as increased health through better access to pumps for wells etc..   If successful, it would also be a  pivotal step toward reversing the vicious cycle of deforestation, desertification and land degradation and bring in a virtual cycle of reforestation, leading to increased carbon sequestration, improved agricultural and community potential and be an important step in the global effort to combat climate change as well as making an extraordinary contribution to address hunger, poverty, instability and war in Africa.

Note added later: To some extent solar power is already expanding in Africa.  See for example this article in the New Yorker https://www.newyorker.com/magazine/2017/06/26/the-race-to-solar-power-africa which describes the race to get solar power to Africa, but also admits that "Electrifying Africa is one of the largest development challenges on earth.".   More recently, in the Globe and Mail, Robert Muggan describes efforts to reduce violence in Mali saying "One approach that does seem to be generating results are the UN's highly localized efforts to reduce community violence." including specifically efforts like "building solar powered water well."   There is an opportunity to act now - to help people in Africa - and to help our planet - will we take it?"