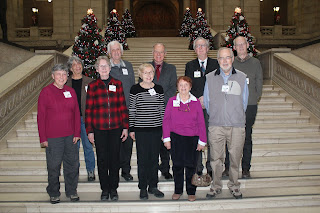 Starting at 9:30 am, this amazing group walks year round whether the sun is shining or the rain or snow are falling.  Members go at their own speed from fast to the not so fast, walking for about an hour and then afterwards socializing with a hot or cold drink.

Come out and join the group.   Over the years more than 150 different people have come.  As Chuck says, - "Like the air we breathe - it is free"   I encourage other MLAs to start groups in their area.

Now in its 12th year, there have been changes over time.  One of their favourite spots was at the Forks.   Sadly, with increased parking costs and other changes they no longer go to the Forks as it is not as welcoming as it once was.

Information and walking schedules are available at the Central Corydon Community Centre phone 204-488-7000 or on their website at www.corydoncc.com.   I recognize Chuck Cruden and other walkers who are here in the gallery today.  I request leave to have the names of all those present recorded in Hansard.