Why is violent crime increasing in Manitoba but not in Saskatchewan? The Pallister government is doing a terrrible job when it comes to crime. 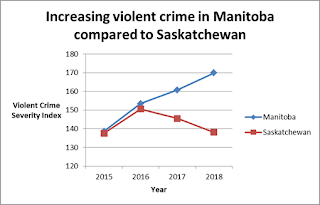 Violent crime, as measured in the violent crime severity index has gone up sharply under the Pallister government in Manitoba.   We used to be similar to Saskatchewan, but no longer.  We are now an outlier.   Violent crime has gone up more than 30 points in Manitoba from 2015 when the violent crime severity index was 138.6 to 2018 when the index had risen to 169.8.   In contrast, in Saskatchewan, the index today is very similar to what it was in 2015.  In Alberta and British Columbia violent crime has decreased since 2015.  Something is rotten in Manitoba under the Pallister government.   I asked what the problem was in Estimates yesterday.  The Minister of Justice replied that he did not know what was going on.

It is also worth noting that compared to the rest of Canada in 2018, the violent crime severity index was 169.8 in Manitoba while it was 82.4 in all of Canada.   We are far higher in terms of  violent crime than anywhere else in Canada.   I am convinced it is not because we have bad people in Manitoba.   I believe it is in part because we have a bad government which has failed to address poverty, failed to address the meth crisis, failed to address alcohol addiction and failed to search for additional causes - including environmental causes like high lead levels.