Remembering Anisa Sadeghi - and raising funds for a scholarship in her name.

January 12, 2020
Anisa Sadeghi and her parents perished when Ukrainian flight PS752 was shot down in Iran on January 8th of this year.   Anisa's family including her aunt Narges Hadjesfandiari are raising funds for a scholarship in Anisa Sadeghi’s name.  The scholarship will provide support for low income families and outstanding students. The scholarship will be dedicated to Anisa’s schools the Henry G. Izatt Middle School in the Pembina Trails School Division and the Persian Language Classes of Iranian Community of Manitoba.

Donations can be made at the go fund me page in the link below where you can see more details of this effort.
https://www.gofundme.com/f/anisas-dream

Donations are close to but still short of their goal of $15,000.  Please consider helping them to reach their goal.  Thank you.

Below is more about the event held January 12 to remember those who lost their lives in this tragedy. 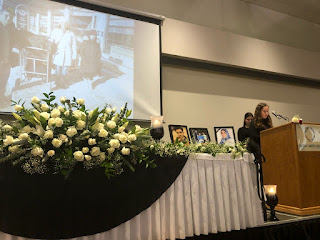 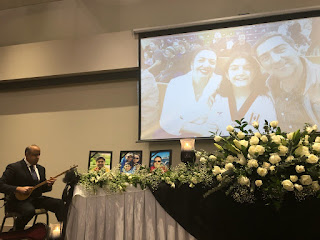 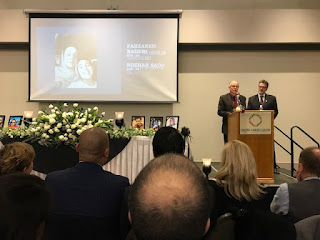 This afternoon, Dougald Lamont and I joined members of the Iranian community in Winnipeg and many others in a special afternoon to remember those who were lost in the tragic ending of flight 752.  My comments at the event are below:

Together we face an enormous tragedy with the loss of 9 Manitobans, 57 Canadians and 176 global citizens.  It is a tough and painful time.

It is a tragedy for us in our city because we have lost so many who were from Winnipeg or who have or have had connections to Winnipeg.   Those we have lost were an important part of the Iranian community in our city, but they were also an important part of our broader community – working and helping others at St. Amant, studying or teaching at the University of Manitoba, and helping to build our province.  They were people with hope and a vision for their future -  hope and vision which has so suddenly been dashed.  It is a tragedy which affects much more than members of the Iranian Community in Winnipeg.  If affects the Ukrainian community for it was a Ukrainian airliner.  It affects all of us – as fellow Winnipeggers and Manitobans.

It is a tragedy for Canada because so many of those on the plane which was shot down were Canadians or had connections to Canada.  It is a very large loss – because those who were lost were exciting, imaginative, creative, energetic people who were already contributing and who had so much potential to contribute in the future.   The number of young people and young students is so heart breaking – so awful – so incredibly sad.

It is a global tragedy because it speaks to the ongoing conflict in the middle east, and the ongoing global conflicts and the need we have as humans to find better ways to solve our mutual problems than to engage in combat which risks lives and causes such loss.  We have a long way to go.

It is time for a global effort to design and implement measures to ensure that no more people are killed when commercial airlines are shot down by military weapons.  Let us push for such an effort. It is time to end this horrific carnage.

I join you today in mourning.  Dougald Lamont and I express our incredible sadness at what has happened and extend our condolences to family and friends of those who have been lost.
Thank you for this opportunity, Merci, Meegwich.