I is now some time since new COVID-19 variants have  been identified  in the United Kingdom, South Africa and Brazil. These new variants are more transmissible and therefore more dangerous, though whether they cause more severe disease is not yet certain.  As Manitoba Liberals we continue to be concerned about efforts which need to be taken to prevent such new variants from coming to our province.   We know that new variants have been detected  in Ontario, British  Columbia and Alberta.   In Ontario a new variant has been identified in an outbreak in Barrie.   Action to prevent such variants coming to Manitoba  should have already been taken 10 days ago.  As well, Manitobans deserve answers to a number of questions concerning these new variants and the Manitoba situation.  Our letter below was sent January 15,  and we still have not had a reply to most of these questions, although public health has indicated that as of January 22, there had been no new variants detected in Manitoba.  The time to act to stop transmission to Manitoba was ten days ago.  We  need to know more precisely why Manitoba Public Health is not taking additional measures with respect to people  coming from Ontario, Alberta and British Columbia to prevent transmission from these locations where the COVID variants have been identified. 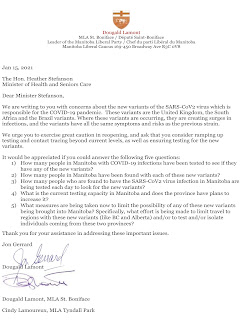 December 06, 2019
Wednesday, December 4 I asked in Question Period about the large amount of vacant space at the Forks Market, some of which had been vacant for two or more years.  I also asked specifically as to why the renowned Skinner's Restaurant was removed from the Forks Market when there is so much empty space now.  My question and the Minister's response are below.    A video of the exchange can be seen at this link -  https://youtu.be/rD0h3cAkT3o The Forks Market -  Vacancy Management Hon. Jon  Gerrard   (River Heights): Madam Speaker, today The Forks Market has a lot of empty space, much of it empty for two or more years. The list of vacant space includes what was formerly Muddy Waters smokehouse, Beachcombers, Skinners, Dragon House, Aida Crystal, significant parts of Sydney's, Sushi Train, and several balcony businesses a lot–along with a lot of unused former administrative space.       The minister overseeing municipal affairs is responsible for oversight of The Forks,
5 comments
Read more

April 20, 2020
Like a sleuth in the night, the Pallister government is cunningly using a bill, bill 34, [updated this is now (Oct 2020) Bill 2] called the Budget Implementation and Tax Statutes Amendment Act 2020, to prevent the return of millions of dollars which was taken away from children in the care of the government.  The monies in question are called the "Children's Special Allowances" or the "federal special allowances for children".  In brief, under Jean Chretien and Paul Martin,  a Canada Child Benefit was established to help support children.  For children in the care of child and family services, where the parents are not directly looking after the children the money is paid to the agencies to help support the children.  There was a time when these monies were being used effectively by child welfare agencies to support children.   Some agencies used these funds in part to provide services to help the children they were looking after and in part into a trust fund
1 comment
Read more