On Wednesday  May 12, I  asked the Premier in Question Period whether he will, after 45 years, finally work with the people of O-Pipon-Na-Piwin and Tataskweyak Cree Nations to  address the damage to their fisheries and to  their communities which have resulted  from building the Churchill River Diversion.

These horrific changes were caused by actions of the NDP 45 years ago which were never mitigated. The whitefish fishery, which sustained 140 fishers and their families, is gone, through no fault of theirs.

I ask: Will the Premier make changes in the oper­a­tion of the Churchill River diversion and put in a fish ladder at Missi Falls to help improve life for the fish and for the people of O-Pipon-Na-Piwin and Tataskweyak Cree Nation?

Hon. Brian Pallister (Premier): Well, I appreciate the member's passion if not his pronunciation, but I have to say that this is a–these are debates that have been ongoing for significant numbers of years. The member is expecting me to resolve them at this very instant. I don't think that that would be a fair assump­tion. I can only say to him that I think all of us should desire a process that's more transparent and that effectively protects the involved parties and that–and reaches a resolution in a reasonable period of time.

What we're trying to do, of course, with the pro­ject in the Interlake is create an outlet that will protect communities throughout that region that have suffered disproportionally for many, many years through in­action on the part of many governments from previous half-century plus.

The Figure below shows the dramatic decline in whitefish produced in the fishery on Southern Indian Lake. 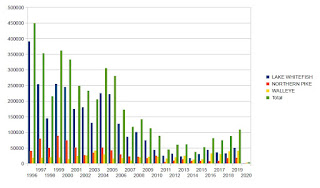