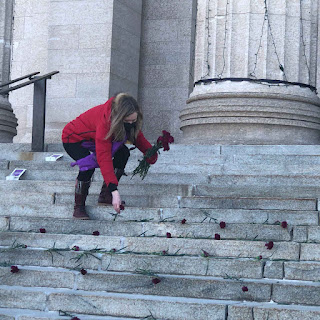 On November 24th, there was a Ministerial statement on National Addictions Awareness Week.  I spoke in response.  My comments are below.  It is to be noted that there was a rally in front of the Legislature on November 24th, just before our sitting started.   Members of Overdose Awareness Manitoba placed 199 purple carnations (photo above) on the steps of the Manitoba Legislature.   Each flower represented a person who had died from an overdose in Manitoba in the first six months of 2021. It is a shockingly high number.

As the demonstration in front of the Legislature at noon today by Overdose Awareness Manitoba shows, we are ever more aware of the inadequacies of the present government's approach to addictions: 199  Manitobans died from overdoses in the first half of 2021–199 Manitobans.

Before the election in 2016, five and a half years ago, members of the present government campaigned to address mental health and addictions together and  to magically solve all the major problems with addictions treatment that existed then. It has not hap­pened. The situation, in fact, has gone from bad to worse.

The story of Lee Earnshaw illustrates this. A respected commercial fisherman in British Columbia who'd been three years sober, he came to Manitoba in December 2020. Sadly, he started using fentanyl and became homeless.

After several more attempts to get help, on June 24th, he died from an overdose.

There needs to be an inquest into the death of Mr. Earnshaw. It will be instructive not only as to the problems with the current approach to addictions, but could also suggest some sig­ni­fi­cant im­prove­ments. Such im­prove­ments are badly needed.

Thank you, Madam Speaker. Let us hope we can move on to a better world in which we have less addictions and substance abuse and less, much less, overdose as a result of this.