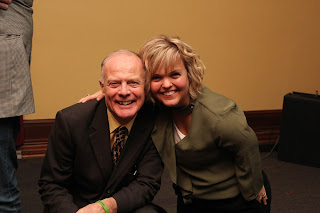 With Samantha Rayburn-Trubyk after the resolution passed. 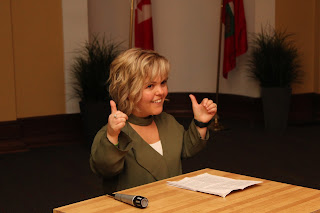 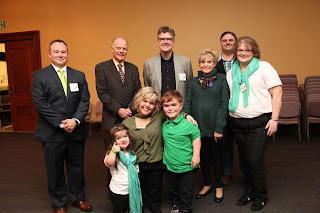 Samantha and her family together with myself and Dougald Lamont, our new Manitoba Liberal Party leader. 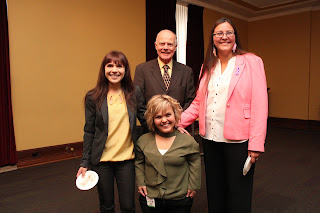 Samantha with Cindy Lamoureux, Judy Klassen and myself. 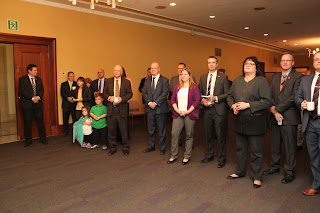 There are in Manitoba about 30 people with dwarfism.  They are often stigmatized and discriminated against because of their short stature.   Yet, in all respects, except for their short stature, they are like other Manitobans.   The run businesses and work in jobs around the province.  They get married.  They have children.   They participate in our community volunteering and helping others.  To draw awareness to their condition and to seek to remove stigmatization and discrimination, I sponsored a resolution on October 24th, to have a Dwarfism Awareness Day on October 25th.  The resolution passed unanimously, being supported by all MLAs.

I want to thank Samantha Rayburn-Trubyk, the President of the Little People of Manitoba, for her help and her advocacy for people in her community.  Samantha, the human resources manager for Price Industries, is an energetic, engaging and passionate public speaker.   I got to know Samantha in relation to my work on Bill 200 to put physical size and weight under the Human Rights Code in Manitoba.  This summer I attended a barbeque organized by the Little People of Manitoba and was able to join them in their joy in getting together and in enabling their children, some with dwarfism, to play happily together.

The full text of the resolution I introduced is below:

WHEREAS October is Dwarfism Awareness Month in many countries of the world and is dedicated to increasing public knowledge, creating positive awareness, changing negative misconceptions and increasing opportunities for people born with dwarfism; and
WHEREAS today, various Little People organizations exist worldwide, including Little People of Manitoba (LPM) because of the parent organization Little People of America (LPA) formed in 1957 by people like actor Billy Barty and his commitment to inclusiveness and his dedication to our community; and
WHEREAS the first LPA meeting was monumental for a group of people who were severely mislabeled and misunderstood by society and the LPM is a non-profit, registered charity, dedicated to creating awareness about prominent issues and providing social support for people with dwarfism; and
WHEREAS it is the mission of LPM to create awareness and to educate the general public about dwarfism; to promote a positive image of people of short stature; to provide social, emotional and educational support to people of short stature and their families; to encourage life-long acquaintance­ship; and to enhance life opportunities for all little persons in Manitoba; and
WHEREAS in declaring October 25 as Dwarfism Awareness Day, LPM hopes to raise awareness that "People with dwarfism are no different than any other person. We may just need a well-placed stool."; and
WHEREAS established in Winnipeg in 1981, LPM is part of a worldwide network of Little People organizations with membership consisting of persons of short stature, as well as families and friends from different genders, ethnicities, socio-economic status and sexual orientations; and
WHEREAS approximately one in 40,000 people are born with dwarfism, eighty percent of them have average height parents and siblings who have a 50‑50 chance of passing the dwarfism gene on to their child; and
WHEREAS it does not generally affect cognitive abilities, there are over 200 distinct forms of dwarfism and skeletal dysplasia which affect bone growth resulting in a typical height range of 2'8" to 4'5"; and
WHEREAS in July 2009 the word "midget" was declared inappropriate and offensive and persons born with dwarfism prefer to be referred to by their own name, other acceptable terms are: having dwarfism, short stature, little person, LP, and the medical terminology use of dwarf.
THEREFORE BE IT RESOLVED that the provincial government be urged to increase opportunities and promote awareness for persons with dwarfism and dedicate October 25th annually as  Dwarfism Awareness Day.