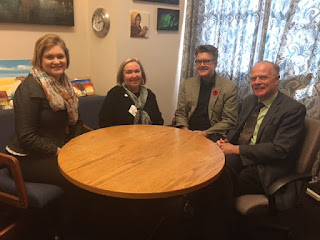 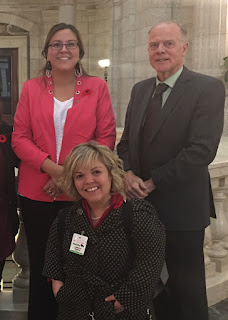 Samantha Rayburn-Trubyk with Judy Klassen and me.   Samantha was in the gallery, along with Lindsey Mazur and Elain Stevenson, for the vote.

This morning the Pallister PCs voted against a much needed measure, Bill 200, to put physical size and weight as protected characteristics under Manitoba's Human Rights Code.  Over the course of the last two years I have met with many people who know of the critical need for this legislation.   The people include as examples, Samantha Rayburn-Trubyk, President of the Little People of Manitoba, Lindsey Mazur, with Manitobans Against Weight Stigma, and Elaine Stevenson, Co-administrator of the Alyssa Stevenson Eating Disorder Memorial Trust.

Discrimination against people based on their physical size or weight is a serious healthcare issue.    This issue is not currently adequately addressed under Manitoba's Human Right Code.  The evidence from other jurisdictions suggests this can help improve the workplace.
1)   It is a serious healthcare issue:  It has been documented that a considerable proportion of physicians (40 per cent) have a negative bias toward obese patients.   More than half of doctors ascribed negative characteristics to obese patients. These attitudes affect the quality of care.    Indeed, it has been demonstrated that obese patients are less likely to receive appropriate care of medical problems that have little if anything to do with their weight.  Furthermore, though losing weight may be beneficial, patients who were discriminated against because of their weight were less likely to lose weight. All these findings are described in Brian Goldman’s book “The Secret Language of Doctors” published in 2014.
2) It is not adequately addressed under our current human rights code.  Weight discrimination even when significantly impacting a person, is not covered under present human rights codes because being overweight is not considered a disability as two cases (below) in Canada have shown.  The details of these cases are below, at the end of this post.
3) There are indications this bill will be helpful in the workplace.  Other jurisdictions have enacted laws which provide protection from discrimination on the basis of physical size or weight. these include the state of Michigan which prohibited discrimination based on a person’s weight in 1977.    The cities of Santa Cruz (1992) and San Francisco (2000) in California have also passed measures which protect against discrimination based on a person’s weight.   In none of these instances have there arisen significant issues for employers.  Indeed, evidence suggests that ending discrimination in the workplace can improve employee health and productivity and result in a healthier workplace.   The cost of anxiety and depression in the workplace has been estimated to cost Canada about $50 billion in lost productivity.  Decreasing such mental health issues in the workplace, by having a fairer workplace can provide significant benefits for businesses as well as for individuals.

Canadian Cases where weight discrimination was allowed due to the absence of legislation to protect people from discrimination based on physical size or weight.

The Ontario Board of Inquiry undertook an extensive analysis of weight discrimination in the employment context in Ontario (Human Rights Commission) v. Vogue Shoes.  The complainant, Carolyn Maddox, worked as a salesperson for Vogue Shoes, and at five feet, four inches, her weight varied between 177 and 200 pounds.  After seventeen years of employment, during which all parties agreed she was a very good worker, the shoe company told Maddox that she would need to lose a large amount of weight in order to keep her job.  She subsequently resigned and lodged a complaint with the Human Rights Commission alleging discrimination based on disability (called “handicap” in the statute at the time).
The Board of Inquiry found as a fact that Vogue Shoes had imposed a restrictive condition on Maddox’s employment because of her obesity, which fit the definition of discrimination from the relevant case law. Significantly, the Board also recognized that obese individuals in general face significant stigma and discrimination in society.  However, the Board ultimately held that obesity did not qualify as a disability under the Ontario Human Rights Code’s definition unless “it [was] an ongoing condition, effectively beyond the individual’s control, which limits or is perceived to limit his or her physical capabilities.” In Maddox’s case, although her weight was an ongoing condition it did not limit her physical capabilities, nor was it perceived as limiting them.  The shoe company’s discrimination was motivated by simple distaste for Maddox’s appearance rather than any perception that she was disabled and, thus, she had no redress under the Code.
Another important human rights case involving obesity as a disability, which was unsuccessful for similar reasons, is Saskatchewan (Human Rights Commission) v. St. Paul Lutheran Home of Melville, Saskatchewan.  The complainant, Sandra Lynn Davison, was a nurse’s aide whose application for employment at the St. Paul Lutheran Home was turned down for the sole reason that she was obese.  Davison was five feet, four inches tall, and weighed 330 pounds. She was described as being “punctual, pleasant, neat, courteous and in excellent health,” and as being otherwise completely qualified for the position.  She alleged discrimination based on physical disability, due to her weight.  The Saskatchewan Court of Appeal upheld the denial of her claim, but not before condemning the type of discrimination she experienced.
As in Vogue Shoes, even though Davison was clearly discriminated against in a way the Court considered deplorable, this discrimination was not based on a ground that fit under the definition of disability in The Saskatchewan Human Rights Code  and was thus permissible.
We would not tolerate similar attitudes limiting people’s employment opportunities if they were in relation to race or gender rather than weight. As such, the legal solution to the problem of weight discrimination should at least hold the possibility of addressing all kinds of weight discrimination, not just the kind motivated by real or perceived disability, and not just the kind directed at the medically obese.