Chronic Wasting Disease - How big a concern is it? What are governments doing to prevent problems with this disease?

December 28, 2017
What should we be looking out for in 2018?   One thing to keep an eye on is Chronic Wasting Disease, a disease which is present in deer and elk in Saskatchewan and Alberta and in several states in the United States. It can also infect moose. To date, thankfully, it has not been found in Manitoba. It is related to Bovine Spongiform Encephalitis (BSE)  (Mad Cow disease) found in cattle and to Creutzfeld-Jacob Disease which occurs in humans.  BSE was found to be able to spread to humans and thus great care must be taken in detecting BSE in cattle and in preventing the prion which causes BSE from being transmitted to people.

Until recently it was believed that Chronic Wasting Disease (CWD) was not transmissible to humans, but evidence, first reported in 2017, shows that it can be transmitted to primates (Macaque monkeys) and suggests it could be transmitted to humans.  Thus we need to be especially careful about the presence of CWD in deer and elk and the possibility that people eating deer or elk meet could become infected.

Though CWD has not been found in Manitoba, it has been found in animals in adjacent areas of Saskatchewan.  I recently wrote to our provincial Minister of Agriculture Ralph Eichler, to ask about the measures being taken in Manitoba to prevent CWD being a problem in Manitoba.   Another reason we need to be extra careful is that CWD is known to be transmitted to hogs, and if CWD were found in hogs in Manitoba this could have a very serious economic impact, as BSE had in cattle a number of years ago. The level of concern is increased because the prions which cause CWD are highly resistant to degradation in the environment, can persist in soil and may contaminate crops and pastures.  My letter to Minister Eichler is below.  I have also written a similar letter to the federal Minister of Agriculture to ask about what the federal government is doing about CWD.

Further information on CWD can be obtained at these sites:
1) CDC report found by clicking on this CDC link.
2) Association of Fish and Wildlife Agencies update at this AFWA site.
3) In Wisconsin, hunters are being urged to test deer for CWD, and state health and wildlife officials have urged hunters not to consume venison that tests positive for CWD.  In 2016, 442 (12%) of 3,758 deer tested in Wisconsin tested positive for CWD!

My letter to Ralph Eichler

I write to inquire about the status of programs at the provincial level currently operating with regard to Chronic Wasting Disease (CWD) a disease which involves prions in a similar fashion to Bovine Spongiform Encephalitis (BCE), commonly known as "mad cow disease".   I note recent evidence that CWD is transmissible to primates.  In these studies CWD was transmitted to Macaque monkeys that were fed infected meat (muscle tissue) or brain tissue from CWD infected deer and elk.  This now creates a concern that humans eating infected meat could become infected, the result being a disease which is similar to Creutzfeld-Jacob disease, a rapid degenerative and fatal brain disorder.

Since swine can readily become infected with CWD after ingesting infected material, even though they may not develop symptoms, there is a concern that swine in Manitoba could become infected with the potential to produce concerns analogous to when Bovine Spongiform Encephalitis (BSE) was discovered in cattle in Canada.

My question is simple.   What is the provincial government doing with respect to prevention approaches to stop the spread of CWD and to ensure we do not have another situation like we had some years ago with BSE? 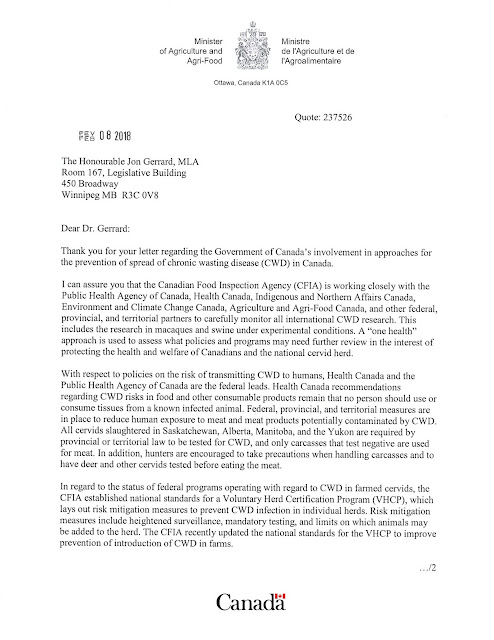 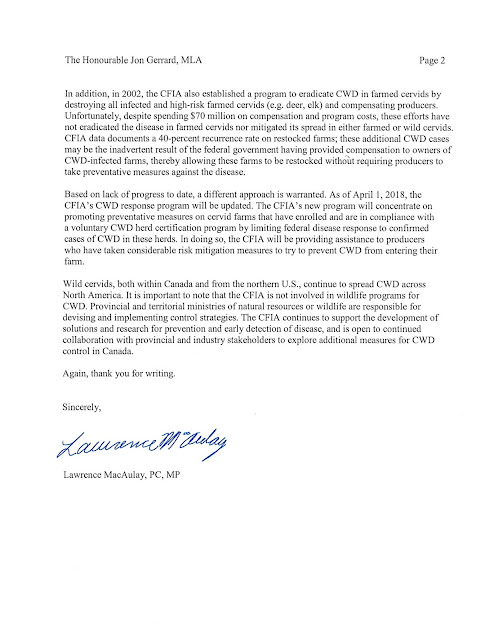