The need to protect an ecologically sensitive area near Rivers from a gravel pit (aggregate quarry) development.

On Monday April 19, I asked in  Question Period about the need to protect an ecologically sensitive area near the Little Saskatchewan River not far from Rivers, Manitoba.  My question and the Minister's response are below:

Hon. Jon Gerrard (River Heights): Madam Speaker, local residents are concerned about a mining lease requested to build a gravel pit near Rivers. This  is in the centre of an ecologically sensitive area  with endangered and threatened species, known archeological sites and human burials as well as unknown heritage resource sites and concerns over water and drainage issues. Four other gravel pits are within a few kilometres, so there's no im­mediate need for this one.

Hon. Blaine Pedersen (Minister of Agriculture and Resource Development): I'll remind the member that this is before a municipal hearing, before the local municipality and has a hearing there, where all resi­dents have the ability to have the input there. No decisions have been made as to whether this quarry will proceed or not. 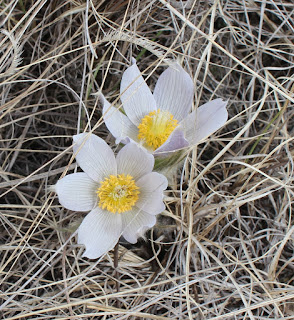 There were  many Prairie Crocuses there. 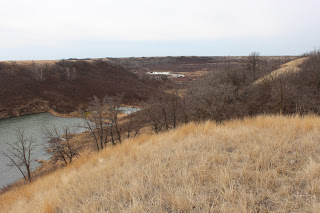 The water from the area of the proposed gravel pit drains into this coulee which is an area with  substantial natural flora and fauna. The coulee drains into the Little Saskatchewan River in the distance. 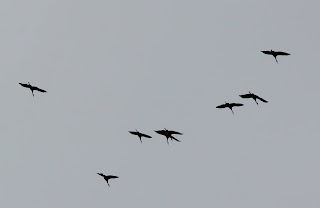 While we were there, a flock of Sandhill Cranes flew over.
A petition to deny the application to have  a gravel pit in the centre of this ecological  area can be signed  on-line  at Here is the link: http://chng.it/s7bDHPj64T  If  you would like a hard copy to sign, please make a request to Shandi Strong in my office at shandi.strong@leg.gov.mb.ca