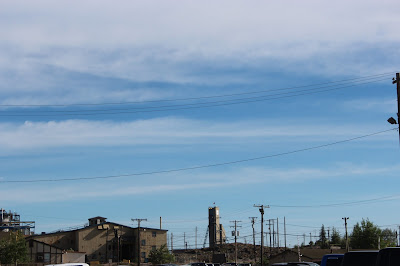 The Triple 7 mine is slated for closure in 2020, and yet the current government, in office for 15 months has not yet presented any plan for Flin Flon’s future.   While there have been false alarms before, when there were concerns that ore in the Flin Flon area may be depleted and Flin Flon’s primary mine might close, this time it seems likely it is for real.  Even if this time it was not a false alarm, there is still need for a plan for Flin Flon.  Where is it?   Why is it not here now? And what should be in the plan?   I was in Flin Flon July 9-11, the latest of many visits to the community.  The first time I was in Flon Flon in 1967, its population was about 11,000.   Today it is just over 5,000.

Let us look first at elements which are needed in a plan for Flin Flon.  First, in our digital world, there needs to be fast access to the internet – broadband with sufficient capacity to download large amounts of information quickly.   This is an essential need in today’s economy.   It was not achieved in 17 years of the previous government.  A plan is needed to ensure fast internet access is present by 2020, if not before.  Local products and services could find broader markets with the on-line world making Flin Flon close, in cyberspace, to the global market of many billions of people.  The connectivity is also needed for bringing specialist expertise to the community including for brain and mental health, and for distant education to keep youth at home and costs down for parents and students and for teleconferencing to meetings and events.

Second, while Flin Flon’s Triple 7 mine may be gone, and substantial new finds close to Flin Flon are unlikely to be on line by 2020, Flin Flon is still in an important mining belt.  Indeed, the greenstone belt is known worldwide and is visited yearly by geologists and scientists from all over the world.  Flin Flon’s zinc processing facility hopefully will continue to operate, with the Lalor Lake copper-zinc-gold deposits.   But getting future base metal deposits lined up should be a priority, as should keeping hydro rates reasonable. The Northern Manitoba Mining Academy in Flin Flon needs to become much more active.   Today, it needs much better financial support from the province to achieve the results that are needed.     It needs to be more active in research in all areas of industry, particularly in mining including mine remediation, and in training students for varied jobs and opportunities within the mining sector.   It could also do better in linking with Hapnot Collegiate to provide skills training for high school students and greater exposure for Flin Flon students to the mining industry and its opportunities.  When I visited the Academy on July 10, there were students from Opaskwayak Cree Nation, Gods Lake Narrows and Moose Lake learning to be prospectors.  This is an important step, but much more training for varied positions, including mine remediation, is needed.

Third, Flin Flon needs to build on its strengths beyond the mining sector.  Flin Flon has an exceptionally rich cultural community.  Plans for a North Central Canada Centre for Arts and Environment have been put forward.   This Centre needs to be further explored particularly with respect to links to other northern communities and including artistic links to Flin Flon and area’s Indigenous artists.

Fourth, the role of Flin Flon as a northern transportation centre needs to be further explored.  Is it possible to have a road up the west side of Manitoba to Nunavut?  Could that road best go straight north from Flin Flon to Lynn Lake?  Could Flin Flon’s airport also have a greater role?  The possibilities for a larger role for Flin Flon in northern transportation, in road, rail and air need to be advanced.

Fifth, in health care and social services, there are options for action.   For example, Flin Flon has an exemplary telemedicine program which has great potential to be expanded through better and quicker links to specialists, and in improved links to other northern communities.    The possibilities for greater support for training and employment of people in Flin Flon in health care and social services certainly exists within the evolving digital on-line world.

Sixth, the potential for increased tourism should be explored.   While relying on tourism in a major way is difficult since activity tends to be related to the value of the US dollar compared to Canada’s dollar, all possibilities for increased economic activity should be addressed, including improving local services and opportunities to advance local attractions, including for example a local virtual tourism web site where people can visit the local sites virtually in 3 dimensions before coming to Flin Flon. Recent improvements to the Flin Flon Museum’s displays highlighting local history are a good example of an improvement in the last few years.  We can also learn from others.  In Australia, for example, Kalgoorlie-Boulder has done an excellent job of making mining related attractions of greater interest to tourists.

The current provincial government has been characterized by slow motion and delay.   It is time for action.   2020 is only three years away, and that is a very short period to ensure new opportunities for people in Flin Flon if the Triple 7 mine closes then, as is now expected.  Let’s get moving – for Flin Flon.  Together we can do it.   I welcome comments and suggestions, and I will certainly do my part to help people in Flin Flon. 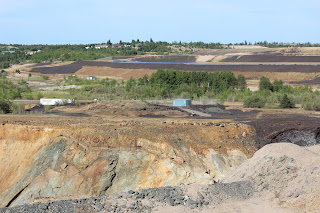 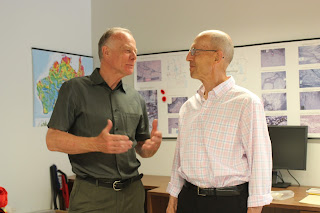 With geologist Eckart Buhlmann at the Northern Manitoba Mining Academy.