Mr. Pallister, on Churchill, it is a time for action, not a time for waiting 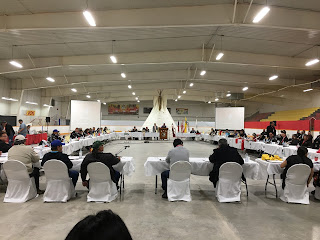 The recent meeting of the Assembly of Manitoba Chiefs in Nelson House at the Nisichawayasihk Cree Nation and the election of Grand Chief Arlen Dumas has created an opportunity for action on Churchill.

Mr. Pallister’s government has been characterized by waiting and delays.  The brain, mental health and addictions initiative so touted during the election, will not even see a first report on what the government might do until almost half way through the government’s mandate in December 2017. The piecemeal, thousands of cuts approach, to health care has created much uncertainty and poor morale within health care.   Even where announcements have been made, like the badly thought out closing of the Misericordia Urgent Care Centre, the physicians have waited months for clarification on how the wonderful eye care team at the Misericordia Health Centre will be supported.   The Premier campaigned to bring in a carbon tax, but his statements to date have only created uncertainty.   Furthermore, the Premier’s inability to work cooperatively with the federal government has delayed funding for Manitoba for mental health, for home care and in other areas.

Now, with the election of Arlen Dumas as the new Grand Chief of the Assembly of Manitoba Chiefs, there is a golden opportunity to act quickly to resolve the impasse over the future of the Churchill rail line and the Port of Churchill.  I was at the recent meeting of the Assembly of Manitoba Chiefs in Nelson House at the Nisichawayasihk Cree Nation and had a chance to talk with many chiefs including our new Grand Chief Arlen Dumas.   He has already spent a great deal of time on the situation of the Churchill rail line and port.  He is ready for action.   But, he needs the province and the federal government as partners.   Mr. Pallister was not at the Assembly of Manitoba Chiefs meeting.   It is one of the most important political forum’s in our province.   People asked me “Where is Mr. Pallister?”  His absence was noted.

Instead of delaying and waiting, Mr. Pallister needs to act.  Even federal Conservative MP, Candice Bergen notes the vacuum created over the future of the port of Churchill and the rail line to Churchill.  That vacuum is there in considerable measure because we have a Premier who has done a great deal to create poor relations with the federal government and is the only Premier who has not even been able to sign the Health Accord and bring money for mental health and home care to Manitoba.    It is time for Mr. Pallister to stop waiting and starting working with others who want to make progress, others who want a solution to the current waiting and delays over the future of Churchill, and who want to help, as quickly as possible, the residents of Churchill,