What is happening with the clean up of Lake Winnipeg - addressing phosphorus and algal blooms? 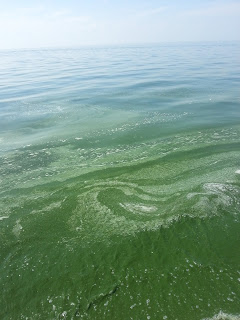 Algal blooms on Lake Winnipeg at Victoria Beach in 2013

Algal blooms on Lake Winnipeg have been increasing and represent a serious concern.  In Estimates on May 16, I had the opportunity to ask the Minister for Sustainable Development about the status of efforts to clean up Lake Winnipeg, to reduce phosphorus in the lake and to reduce algal blooms.  My question and the Minister's response is below (from Hansard).

Hon. Jon Gerrard (River Heights): I would like to ask the minister about her plan to address the algal blooms in Lake Winnipeg, to decrease phosphorus, including the timelines for completing the sewage treatment at the North End plant to remove phosphorus, addressing the monitoring in lakes and rivers in the Lake Winnipeg watershed plans with respect to other areas of phosphorus source, including agricultural sources and sources like commercial dishwasher detergents.

Ms. Squires: I appreciate the member's question on, you know, protection and the survival, really, of Lake Winnipeg, and I know that in the past it's–he's brought forward recommendations and, I believe, even legislation in the past to help protect and improve water quality on Lake Winnipeg, and I want to commend and congratulate him for his ongoing advocacy for the cleanup of Lake Winnipeg and specifically in terms of how we can protect and improve our water quality here in Manitoba.
And so I can share with the member that our government has done–taken several measures thus far in how we can really move towards enhanced water quality and water protection. I had shared with the member, perhaps at committee for Bill 7 or in another forum, the importance of looking at the water that we have in our watershed.
We know that we do have an abundance of water. We have–over 50 per cent of our nutrients that come into Lake Winnipeg and I think 70 per cent of our water that comes into Lake Winnipeg comes from upstream jurisdictions.
And so a large part of what our government is doing is, of course, working with other jurisdictions. I've been in regular communication with Saskatchewan, and I know my deputy minister has been involved in a committee with his counterpart in  Saskatchewan, at how we can make sure that  Saskatchewan is more responsible upstream landowner, if you will.
We know that we do receive a lot of water from Saskatchewan and Alberta and Ontario, and working with them in a more collaborative approach to nutrient management is certainly a key to success. And so I'm pleased that that work is progressing.
I was also very pleased to see Saskatchewan take a real legislated–legislative step towards, you know, upstream–responsible upstream landowner manage­ment practices, much like what we do here in Manitoba and much like what our Bill 7, The Sustainable Watersheds Act, mandates is really making sure that the upstream landowner is responsible for what's going to happen to the downstream landowner when that water flows and what's going to happen in terms of the, you know, the flooding impacts, but also the nutrient management, and like I'd said earlier, so, you know, a huge majority, over half of our nutrients, come from upstream landowners, so we're working with those jurisdictions and certainly having good collaboration with our southern partners on this very topic, as well.
I believe the member is also in attendance at several of the meetings that we've had with the Red River Basin Commission and some of the events that we've had with them and recently had conversations with their officials on some of the issues that they're doing to ensure that the water that's coming into Manitoba has reduced nutrient loads and there's so many things that we can do to reduce–keep the nutrients on the land and not putting them into the water.
I did want to share with the member that one of the things that our government is doing is making available the nutrient reports where we're taking them from a variety of sources throughout the province, and we're going to be putting that data online every four years in a comprehensive report, but every year, we're going to be putting that data online so that people can see where nutrients are coming from and where nutrient reductions have been achieved, and we're going to be very transparent about that process. We think that that's going to have a positive impact on our water quality in Lake Winnipeg.
The member spoke specifically about the, you know, the issue of the combined sewage overflows and the North End Water Pollution Control Centre, and, of course, these are major projects that have been under way.
I know the CEC had recommended in 2003, which is long before our government had formed in 2016, so that was 13 years prior where the CEC had said that really, the city should look at, and the province ought to provide the framework for moving forward to upgrade those combined sewer overflows in the city.
And so our government is working collaboratively with the City of Winnipeg and through Municipal Relations to ensure that the City of Winnipeg modernizes its–

[In reviewing the Minister's response it is clear that the Pallister government has not yet got a solid and comprehensive plan to reduce the phosphorous and algal blooms on Lake Winnipeg.   This is sad because they have already been in government for more than 2 years.  So far they have not put the priority that is needed to clean up Lake Winnipeg.   An article May 19 in the Free Press confirms the concerns of cottage owners on Lake Winnipeg and argues for much stronger measures by the Pallister government.  Click on this link for the article. ]