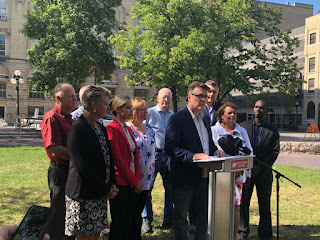 Earlier today, in the Old Market Square in the Exchange District Dougald Lamont announced our Manitoba Liberal Party approach to the Arts and to Culture in our province.    The full details are below:

Artwork is Work: Liberals Unveil Arts and Culture Plan for Manitoba
Manitoba Liberal Leader Dougald Lamont announced today that a Manitoba Liberal Government will end decades of neglect of Manitoba’s cultural infrastructure and cultural industries by the NDP and PCs.
“For decades, Manitoba’s arts and culture scene has been one of the best in Canada, but provincial investment has been frozen or stuck in the 1970s,” said Lamont, “Our culture is a huge part of what makes us special as a province and it attracts people – including paying customers – who wouldn’t be here otherwise.”
According to an analysis of 2016 and 2017 Statistics Canada data the arts and creative industries account for 35,000 jobs in Manitoba and add $2.2 billion to Manitoba’s GDP annually, making the creative industries one of the province’s top 5 sectors.
Under the NDP, culture and heritage funding for Manitoba was essentially flatlined. The PC government has cut or flatlined virtually all arts and culture organizations and agencies – including significant cuts to successful programs for workforce development and market export. The PC “Cultural Review” postpones almost every action to beyond 2020.
Manitoba Liberals believe that with better infrastructure funding, Manitoba’s cultural economy could grow significantly – by improving venues and increasing access.


-        Adding to municipal funding to increase per capita arts funding by $4-million in the first year, and raising it to the national average by the end of a first term.
-        Creating a “Blue Plaque” heritage program, recognizing historic and cultural figures and sites across the province in partnership with Travel Manitoba
-        Restore funding to workforce development and training to ensure that new artists and creative workers can keep joining the industry. The optimal amount will be determined in partnership with existing arts and training organizations.
-        Restore funding to creative industries export programs to ensure that Manitoba made Intellectual Properties such as our films, music, art, literature and video games can succeed in today’s global marketplace.
Lamont said the PCs have made it clear that if re-elected, they will continue to starve the sector. Even as Pallister cuts cheques for $200-million to bail out the Bombers stadium and orders MPI to hand millions to brokers for work they haven’t done, the PCs won’t put money into enhancing a homegrown industry that employs more than 20,000 people.
“Pallister has ignored basic infrastructure investments in culture that will create jobs, and make tourism and attractions across Manitoba even better,” said Lamont. “It’s time the Manitoba Government showed some pride and interest in our local arts scene, instead of undermining it.”