August 15, 2019
Manitoba Liberals called for putting psycholgical services under medicare before the 2016 election.  Since then, much work has been done.  In fall 2018, I was invited by Joanne Unger to hear David Clark speak at the Faculty of Medicine campus at the Health Sciences Centre.  I was impressed by his presentation on the development of the Improved Access to Psychological Therapies (IAPT) program in England.

Earlier this year, in April, I went to England to speak at a conference on Science, Statistics and Public Policy.  In addition, while I was in England I arranged to visit with David Clark, Peter Fonagy and Steven Pilling in order to learn more about the successful implementation of the IAPT (Improving Access to Psychological Therapy) program in England. 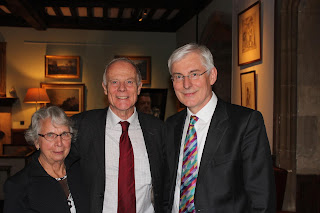 Professor David Clark, Chair of Experimental Psychology at the University of Oxford, is the National Clinical and Informatics Advisor for IAPT.   Together with Richard Layard he is the primary architect of the IAPT program and a coauthor of the book "Thrive" which describes the program in detail and its successes.   The program has done so well that it has been called one of the most successful implementations of an evidence based health care therapy in the world.  The journal Narture described IAPT as "world beating". 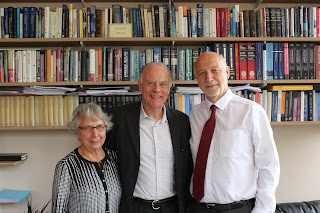 Professor Peter Fonagy,  who is with Naomi and me in this photo, is the Head of the Division of Psychology and Language Sciences at University College London, the Chief Executive of the Anna Freud National Centre for Children and Families and a National Clinical Advisor on Children's Mental Health for the National Health Service in England.  He is developing and helping to implement the approach which is being taken to implement the IAPT program for children and youth.  They are working closely with schools to implement it. 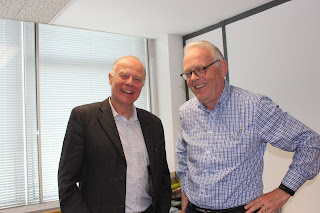 I also met with Professor Steven Pilling, with the Research Department of Clinical Health and Educational Psychology at the University College London.  Key to IAPT was the National Centre for Health and Care Excellence (NICE) which determines which therapies have sufficient evidence of effectiveness to be recommended for clinical use.

Backgrounder on the Improving Access to Psychological Therapy (IAPT) Program in England
This program arose from the realization that there are effective psychological therapies, but because there are not enough psychologists to deliver them, they needed to make a major change in how psychological services are delivered in England.  It was also realized that there was a major imbalance between the availability of treatment for physical illness (good availability) in contrast to mental (brain) illness where only a fraction of those needing help were able to get it.  “While nearly everyone who is physically ill get treatment, two in three of those who are mentally ill do not.” (1)* The situation as it was in the United Kingdom is very similar to the current situation in Manitoba and Canada.
The IAPT program arose because of the joint efforts of a clinical psychologist (David Clark) and an economist who was also a politician in the House of Lords (Richard Layard).  Together they were able to convince key politicians that there is an effective solution to providing the needed psychological services and that the solution makes economic as well as health care sense.   The information provided here is derived from 1) the book on this program “Thrive” written by Richard Layard and David Clark (reference 1), 2) A lecture given by David Clark at the Health Sciences Centre on November 19, 2018 which Jon Gerrard attended and 3) Follow up correspondence between Jon Gerrard and David Clark and 4) Meetings with David Clark, Steven Pilling and Peter Fonagy in England in April 2019.
Psychological therapy is as good or better than medication in the short term and better in the long term for depression and anxiety.  It is better in the long term because it provides a long term effective treatment, while pharmaceutical therapy generally only works as long as the person takes medication.  Yet, “Despite all the evidence for psychological therapy most people with depression and anxiety disorders are not offered it.  If anything, they are offered pills.  But three quarters of them would prefer psychological therapy.”*
IAPT  “only started in late 2008, but by 2013 it was treating some 400,000 people a year, nearly half of whom had recovered by the end of treatment.  Since the model has worked so well and is transparent, it has generated major interest in other countries …and Norway and Sweden have already started to introduce their own version of the system.”
Key to introducing IAPT in England, and in making the case for introducing IAPT is England’s National Institute for Health and Care Excellence (NICE).  “Its job is to review the scientific evidence about the different treatments available for every problem, physical as well as mental.  So it assembles widely representative panels of experts, and the National Health Service is obliged to provide the treatments which they recommend.”
David Clark and Richard Layard initially wrote a paper for Tony Blair’s Policy Unit called “Mental Health: Britain’s biggest social problem.  This argued that to implement the NICE Guidelines we should be able to treat at least 15% of the diagnosable population each year, and this would require some 8,000 more therapists in England, most of whom would have to be trained.  The paper made its impact through three simple points.  The first was the scale of suffering and the injustice of denying people the NICE recommended treatments they preferred.  Second (and very important) there was the economic argument that mental illness cost the government billions of pounds, and treatment would therefore have no net cost to the Treasury.   And third, routine outcome measurements would show what the system was really achieving.”   As a result of the paper and a follow up seminar for politicians, Labour’s election manifesto included a commitment to “improve our services for people with mental health problems at primary and secondary levels, including behavioural as well as drug therapies”.  Following the election, IAPT was implemented.
The IAPT program has six main criteria which a service has to satisfy if it is to be an IAPT service.

1) It has to deliver only evidence-based, NICE recommended therapies.   This includes not only CBT (Cognitive Behavioural Therapy) but interpersonal therapy, brief psychodynamic therapy, couples therapy and counselling for depression.
2) It has to employ therapists who are fully trained in how to deliver the relevant treatment. (the IAPT program worked with post-secondary education institutions throughout England to train about 6,000 people in six years (by 2015).  Most training programs were one year.
3) It has to measure patient outcomes on a session-by-session basis, with at least 90% completeness of data.
4) Each patient receives a professional assessment when she or he arrives and is then allocated to high or low-intensity treatment as appropriate.  About 46% get low intensity only, 34% get high intensity only, and 20% get both – having been stepped up to high intensity after low intensity failed.

5). Each therapist must have weekly supervision, and each trainee must have a well-qualified supervisor.
6)   The service must be open to patients who refer themselves, without going through their general practitioner.  This broke with the normal arrangements in the National Health Service.   When it was proposed, some people argued that it would attract the “worried well”.  On the contrary, it was found that patients who self-refer are as ill as those coming through their GP.   They have also been ill longer, and recover as well (often with fewer sessions, reflecting their high level of motivation).  They also include a higher proportion of people from black and minority ethnic groups than patients referred by GPs, and this helps to ensure that IAPT patients have a more similar ethnic balance to the population at large.

(Note on numbers: With England having a population of 56 million and Manitoba having a population of 1.3 million, training 147 people in Manitoba would be equivalent to training 6,000 people in England).  The annual funding allocation in the third year was 170 million pounds.   This would represent for Manitoba about $7 million in the third year based on current exchange rates between the UK and Canada. )

Note on the Economic costs of mental health problems:
In the book “Thrive” the authors make the case for the economic cost to England as a result of mental (brain) illness.  They break this down into the lost economic productivity as a result of mental illness.   This cost is estimated at 4% of GDP.   For Manitoba 4% of GDP (2017) is $2.84 billion.  The estimate is that about half of this lost cost ($1.42 billion in Manitoba) is due to lost economic productivity because individuals with mental health problems are not working, working part time or not working efficiently.  It is estimated that the other half is due to the combination of lost taxes to government and increased costs of social assistance and other supports for those who are not employed.  The second component of economic cost is the cost of crime which results from the mental illness.   This cost is estimated at 2% of GDP ($1.42 billion), half of which is a cost to government.   The third component of the financial cost is estimated at 1% of GDP ($0.71 billion) as a result of the additional costs of physical illness due to mental illness.  The authors estimate that those with mental health problems have 60% greater costs related to physical illness that that who do not have mental health problems. More than half this cost is a government cost. In total the economic burden of mental illness is 7% of GDP.  This would represent $4.97 billion in Manitoba for 2017.

A big thank you to Joanne Unger, David Clark, Peter Fonagy and Steven Pilling for their help and advice.


A full description of the IAPT program in England can be found at this link https://www.ncbi.nlm.nih.gov/pmc/articles/PMC5942544/