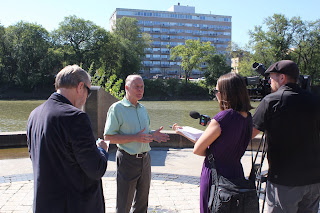 Winnipeg has a proportion of the sewage going into pipes which combine the removal of sewage with the drainage of rainwater,  The result is that when it rains there is an overflow of sewage into our rivers.  This is not a good situation.

In December 2015, the City of Winnipeg presented a master plan to the province in which several options were spelled out for addressing this problem.  These options, costing between $830 million and $4 billion vary from a partial to a full separation of sewage and rainwater.  The City is now waiting for a letter from the Province as to which option the Province will mandate.    However, in the 16 months since the election of the Pallister government no such letter has been sent.  Today I called on the Pallister government to end the delaying and to get to work and send the letter.

At the same time, I indicated my view that whatever the short term requirement of the City may be, it is important to keep the goal of having a full separation of sewage and rainfall,   Indeed, I called for the province to ensure that the letter contains a requirement for the City to have a plan and timeline for the full separation.

Ending the use of pipes which combine sewer and rainfall, and achieving full separation of the combined sewer pipes is important for three reasons:

2) Raw sewage contains infectious agents including coliform bacteria like E. Coli and Salmonella, viruses like the norovirus and hepatitis A and parasites like cryptosporidium and cyclospora.   Our rivers are used recreationally and they should be safe from a health perspective and this means eliminating the use of combined sewers.

3) With climate change we can expect more severe rainfall events.   This will result in more raw sewage going into the Red and Assiniboine Rivers unless we eliminate the combined sewers and achieve the separation which will mean all the sewage goes through a sewage treatment plant before going into our rivers.