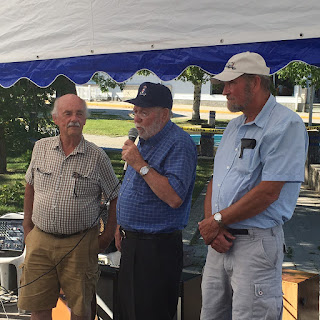 Yesterday, in Gimli, I joined many others to pay tribute to the efforts of Robert T. Kristjanson and the many years he has put in helping save Lake Winnipeg.   Robert was one of the first to point out the problem with algae on Lake Winnipeg, and he has been relentless in his efforts to ensure Lake Winnipeg and its fishery will have a healthy future.   In the photo above, Robert Kristjanson is together with Bill Barlow and Al Kristofferson.   The three became known as the three amigos as they travelled around Manitoba and into the northern United States to raise awareness about the plight of Lake Winnipeg.   I should add, that I had many positive comments in Gimli about my recent call for ending the dumping of raw sewage into the Assiniboine and Red Rivers by the City of Winnipeg.