Is exposure to lead a reason for Manitoba's high violent crime rate?

Manitoba has the highest violent crime rate in Canada.   The rate is more than twice as high as most other provinces as you can see from the figure below.   Why is this? 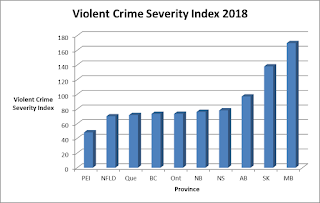 In a recently released report, I explore the possibility that lead pollution and contamination could be a reason for this high crime rate.  A great deal of evidence now shows that lead can be a reason for a high crime rate. For example the graph shown below is taken from a study in New Orleans.  Lead emissions from leaded gasoline peaked in New Orleans in the  1970s and then decreased rapidly when lead was removed from gasoline (blue line).   Twenty years later there was a peak in violent crime in New Orleans - a peak which corresponded closely to the  peak in leaded gasoline twenty years earlier (purple line).  As has been shown in numerous other studies, which we reference in our report, lead impacts the developing brain during fetal life and in the first few years after birth.   This impact changes the brain and is reflected about 20 years later in an increase in violent crime. 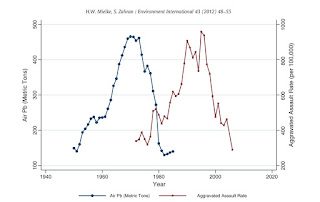 In my report on lead and crime, I explore the reasons why lead is a cause of crime.  Lead alters the  brain so that children have difficulty learning and their reading progresses slowly,    At the same time the lead has an impact on behaviour so that children affected by lead are more  impulsive, are more likely to have attention deficit hyperactivity disorder (ADHD), and have less self control.  As a result these children often struggle in school and become frustrated, and too often they drop out of, or are suspended from school.  These children, are more likely to engage in substance abuse (whether alcohol or drugs), are more likely to have mental health and addictions issues and are more likely to become juvenile delinquents.   All these are on the pathway from lead exposure to crime as shown in the figure below. 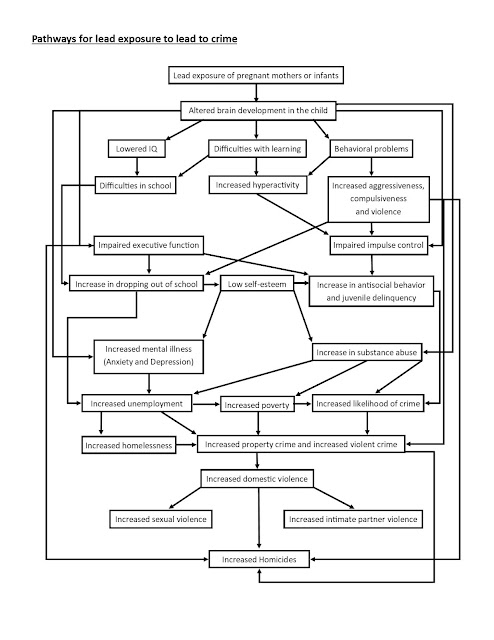 The good news is that intervention early in childhood can prevent the progression from lead exposure to crime.   The figure below shows the findings of a study conducted in Charlotte and Mecklenberg County in North Carolina.  In this figure you can see as the concentration of lead in the blood of children (aged 1-3 years of age) increases from 1 ug/dL to 10 ug/dL, there is an increase in arrests for violent crime in later years.  However in a  group of children who initially tested at  10 ug/dL or more, who received an intervention (10-I), the violent crime arrests were dramatically reduced.   The intervention consisted of a vigorous approach to reducing exposure to lead (lead remediation), addressing nutritional issues (poor  nutrition can lead to increased lead absorption and lead toxicity), and addressing learning and behavioural issues. 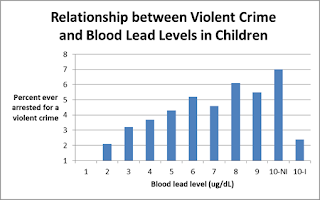 There is a lot of evidence that there has been too much lead contamination in Winnipeg and in other parts of Manitoba (including from industry, from lead in paint and lead in our drinking water from lead pipes).   We need to act in Manitoba to reduce lead exposure, to test children early in life and to intervene early on whenever a child has a high blood lead level.  For more see the report "Lead and Crime in Manitoba: Urgent Action Needed" by clicking on this link