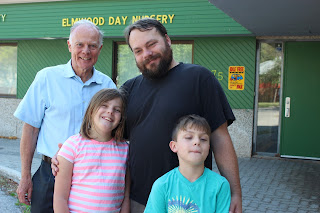 This morning I announced my commitment to a universally accessible child care and early childhood learning system for Manitoba.  The press release is below.  Above, I am with Regan Wolfrom and his children Isla and Colin at the Elmwood Day Nursery where I made the announcement.   Regan and his family have used child care in Manitoba and appreciate the importance of having access to quality child care and early childhood education.

Manitoba’s child care deficit is a critical issue for all Manitobans, as it slows the province’s economic growth.  Probe Research’s Manitoba Business Leaders Index 2016 found that almost half of the province’s corporate leaders (49%) reported having difficulty finding skilled employees.[4]  Meanwhile, a 2016 Manitoba Child Care Association survey found that 41 percent of new parents had delayed returning to work, 30 percent had turned down a job, and 24 percent had turned down an educational opportunity because they lacked child care.[5]  Moreover, investing in high quality child care helps to advance women’s equality, reduces poverty, supports working families, and has a range of positive impacts on childhood development.

Dr. Gerrard recognizes that an immediate solution to the province’s child care deficit is needed.  Within two months of being elected leader, Dr. Gerrard will appoint a Liberal Early Learning and Child Care Task Force.  It will use the Manitoba Early Learning and Child Care Commission Final Report (January 2016) as the basis of province-wide consultations to ensure we have a plan that is ready to launch upon forming government.  The plan will be released before the 2020 provincial election.

The plan must provide:

A.      Stable, affordable, universally accessible, and high quality early learning and child care for all Manitoba children;
B.      Fair wages for childhood educators;
C.      The reduction of wait times to no more than 3 months, as soon as feasible after the election;
D.      An approach that facilitates the early identification and treatment of children with learning disabilities, including hearing, speech and language disorders.

Should a Liberal government be elected in 2020, Dr. Gerrard pledges to appoint a Minister specifically charged with overseeing the implementation of our early learning and child care plan on a priority basis