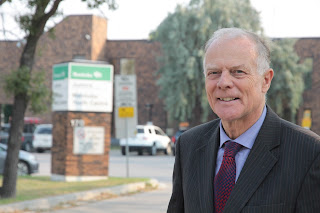 This morning, in front of the Manitoba Youth Centre, I called for improvements to the current Child and Family Services system to provide much better support for families.   My press release is below.

Today, at the Manitoba Youth Centre, Manitoba Liberal Party leadership contestant Jon Gerrard called for urgent action by Scott Fielding, Minister of Family Services, to change policies which would shift the paradigm from a focus on child apprehensions to an integrated approach to support families.

Citing the success in Nisichawayasihk Cree Nation (NCN) in Nelson House and by Westman CFS in Brandon -- both use an integrated service delivery approach for families -- Gerrard said, "It is time to put the ‘families’ back in the Family Services Department and ensure they receive much stronger, consistent, and individualized help so that children at risk get the early support they need to be safe and healthy -- with apprehension being a last resort."

Manitoba has the highest rate of children in care per capita in Canada and among the highest rates in the world.  Being in care carries an increased risk for dropping out of high school, for homelessness, for poverty, for addictions and for incarcerations.  A staggering two thirds of Indigenous people in prison in Manitoba were involved in the child welfare system when they were children.

“The integrated service delivery model that has been successfully used in the Nisichawayasihk Cree Nation (NCN) and by Westman CFS in Brandon illustrate how critical it is to have a paradigm shift in Manitoba's Family Services Department," said Gerrard. "Providing families with counselling services, with family resources support, with support to prevent FASD, and with public health support has been shown to be effective in reducing apprehensions and helping families stay together in healthier and safer environments."

At NCN, apprehensions have been reduced considerably, which has been accompanied by a reduction in crime and a greater than 40% reduction in substance abuse.(1)

"Minister Fielding needs to end the "apprehend first" practice the NDP used that ballooned the number of children in care and that the PCs still overuse, and end the policy of funding child welfare agencies based on the number of children they apprehend," added Gerrard. "The PCs must, instead, develop policies to fund integrated service delivery for families -- and this needs be provided throughout Manitoba."

Together with the change to an integrated service delivery model, Gerrard says Manitoba needs to build on international models like the Signs of Safety and Family Finding approaches which build on family strengths, respect family contributions and keep families together, rather than the old way of focusing on family weaknesses which often results in the breakup of families.  A made in Manitoba approach to customary care, and improved measures to address poverty, will also help.

Dr. Gerrard, a longstanding advocate for children who introduced the Jordan's Principle Legislation Act in the Manitoba legislature in 2008, added, "The time is long past due for the PCs to act quickly on the recommendations by the Phoenix Sinclair Inquiry and the Truth and Reconciliation Commission and change the current approach of child welfare agencies so they significantly reduce the number of children needed to be taken away from their families -- a traumatic experience that can be better prevented with the right supports."