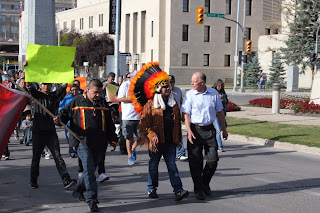 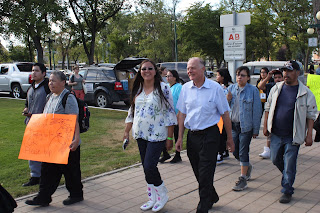 Today, Chief Dino Flett together with many members of the Garden Hill First Nation, Wasagamack First Nation and St Theresa Point First Nation marched from the Soccer Complex on Leila Avenue in Winnipeg to the Manitoba Legislature.   Accompanying them was Judy Klassen the Liberal MLA for the constituency of Kewatinook.

Chief Flett, Judy Klassen and other First Nation leaders called upon the government of Manitoba to declare a state of emergency and take effective and immediate action to provide additional help for the evacuees.  I joined the march near the Legislature (photos above), and then Judy Klassen and I both spoke during the event at the Legislature.  In my remarks I supported the call for the province to declare a state of emergency.   I also called for an inquiry into why no effective action was taken when the fire was small to prevent its spread.  In discussions I had with individuals aware of the situation the fire is believed to have been started by lightning on Friday September 1, then was small on Saturday and Sunday before enlarging considerably. We also need to know why even today there are apparently no water bombers being used to shorten the life of this fire to allow evacuees to go home sooner.

I believe we need critical planning implemented and action taken to ensure forest fires are addressed as quickly and effectively as possible so that the spread of fires is much more limited and communities are not threatened.   It should be possible to reduce the likelihood of emergencies like those faced in Poplar River FN, Wasagamack FN, Garden Hill FN and St. Theresa Point with earlier quick and effective action.

For too long, the community of Wasagamack has gone without an airstrip or a health centre.  The recent crisis has highlighted why this must no longer be delayed.  Climate change will only increase the risk and severity of forest fires in the years to come.  The government must act today to avoid even worse outcomes in the future.

I also urge the government to establish improved protection and emergency preparedness for all First Nation communities in Manitoba, including a thorough action plan to protect forest fires from approaching and/or entering communities, and to protect the community should a forest fire reach a community.
Such a plan could include:
- building firebreaks
- clearing underbrush near communities
- considering metal roofs in new homes, and for houses on the edge of communities
- more effective emergency response capability locally in communities
- the potential deployment of fireboats locally to limit fire spread and to offer better protection to communities
Youth in each community should be involved in developing and implement these plans.