Raising concerns about the need to address poverty in Manitoba 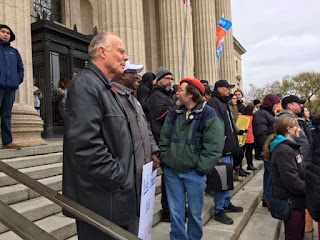 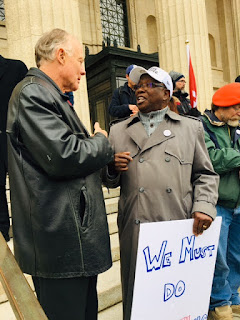 Request for Government Plan
Mr. Dougald Lamont (Leader of the Second Opposition): Madam Speaker, I'd like to thank the folks from Make Poverty History for joining us here today.
When it comes to dealing with poverty, Manitoba's record stands out as unique in its failures. I table a report that shows between 1981 and 2010 every single province experienced a considerable drop in poverty for single-parent families but one: Manitoba, where it increased by 9.1 per cent.
Manitoba has seen more than $1 billion in corporate property and individual tax cuts for the wealthiest Manitobans while hiking taxes on those who can least afford it, years of frozen budgets and layoffs, two-tier workplaces, privatization and balancing budgets on the backs of the poorest of the poor who haven't seen a raise in their incomes in more than a generation. And that was just the NDP, Madam Speaker.
For 17 years the NDP maintained and even surpassed right-wing PC policies on crime–
Some Honourable Members: Oh, oh.
Madam Speaker: Order.
* (14:30)
Mr. Lamont: –taxes and poverty. Instead of doubling down–
Some Honourable Members: Oh, oh.
Madam Speaker: Order.
Mr. Lamont: –on the NDP's failures, will this Premier deliver his long-awaited poverty plan–[interjection]
Madam Speaker: Order.
Mr. Lamont: –and action to match it?
Hon. Brian Pallister (Premier): Madam Speaker, we are somewhat pleased with the modest progress we've experienced thus far in battling poverty, but, certainly, emboldened by the challenges of doing more and better on these important files. And I would say to the member that certainly we are encouraged, in the sense that we are leaving more money on the kitchen tables of Manitobans, which does help to alleviate poverty in those households that he referenced, as opposed to raising taxes like the PST, broadening the applications of the PST, as the previous administration did, which made things harder for low-income households.
Frankly, Madam Speaker, as their tax levels rose disproportionately, poverty levels rose along with them and this hurt low-income families very much. We want to help low-income families. We want to make sure that we're doing everything we can.
I want to say, Madam Speaker, as I have the opportunity, congratulations to Tom Yandeau. The people from Plumas worked so hard on the Plumas Pirates franchise for 75 years. It's a fine community, he's a fine guy and he makes his former teachers very, very proud.
Madam Speaker: The honourable member of the second opposition, on a supplementary question.

Clawback for Children in Care
Mr. Dougald Lamont (Leader of the Second Opposition): Madam Speaker, we should all celebrate that Manitoba has fewer children living in poverty, but I don't know that there's a shred of evidence that this government's policies have anything to do with it.
The improvements for families of children coincide with the new federal–
Some Honourable Members: Oh, oh.
Madam Speaker: Order.
Mr. Lamont: –Canada child benefit, which is progressive and tax free. It actually goes to families who need it most. Since being implemented it means $500 million more in new funds for Manitoban families, a guaranteed income for children.
But, Madam Speaker, both the NDP and the PCs had followed the practice of confiscating that benefit from the 10,000-plus children in care and using it to shrink the deficit, effectively taxing the income of the poorest, most vulnerable children at 100 per cent. In opposition, the member for Portage la Prairie (Mr. Wishart) called it immoral.
Will this government cease the shameful, immoral practice of taking funds from the poorest, most vulnerable children in the province: children in care?
Hon. Brian Pallister (Premier): Well, to be fair, Madam Speaker, to the federal government in this   respect–who the member praises from his Ottawa‑west location as Ottawa-east–let's also understand that they have broken their commitments on a number of important fronts, whether it be electoral reform or on balancing the books. They actually have proposed now to add to the debt of our country over $30 billion over the next few years.
I know the member supports that and has said that the problem the NDP had wasn't overspending in the past, it was underspending. So I know his belief that we can hand these obligations to our children and grandchildren is instilled in him. But we don't agree that that's fair or right.
We are working to address poverty; we will continue to do so. And I would praise the federal government where I felt it was deserved. In this particular instance, I think it's not that much deserved.
Madam Speaker: The honourable Leader of the Second Opposition, on a final supplementary.

Request for Government Plan
Mr. Dougald Lamont (Leader of the Second Opposition): Madam Speaker, the Premier's mistaken when he says that I think the NDP should have spent more. What I said is that, like the PCs, they blew a hole in the deficit and in the debt by doing a billion dollars in tax cuts by 2009. Perhaps if the Premier had spent more time in the province, he'd be aware of that.
But between 1981 and 2010 Manitoba's had the   worst growth of any province. One of the fundamental reasons for Manitoba's poverty is that our wages are low. One in five Manitobans haven't seen a raise since 1976.
Last December in the state of the province address, the Premier revealed that his government had hired a high-priced consultant who discovered, to the Premier's shock, that this government has no plan for jobs, growth or economic development, something any Manitoban could have told him for free. This total lack of a plan was cited as one of the reasons for Manitoba's credit downgrade last year, and there is still no plan and no action.
Will this government's economic plan recognize–when it's released–that we need to create new jobs with better wages so that parents can lift themselves and their children out of poverty?
Hon. Brian Pallister (Premier): There's much more to do, of course, to help people get out of poverty. The old axiom about the best cure for poverty is employment opportunities or a job is–to some degree is valid. And so I would share with the member of doom and–I'm sorry, of St. Boniface, Madam Speaker, that Manitoba has had some experience in the last two and a half years of a positive nature he shouldn't ignore.
We've led the country in agricultural productivity and farm cash receipts, that's a–[interjection]
Madam Speaker: Order.
Mr. Pallister: –good news thing, because many of our people are rural and are impacted, as we all are, by ag economy. We've led the country in retail sales of vehicles, for example. In terms of private sector capital spending growth we are first in the country, Madam Speaker, and expected to be first again this year. In terms of international exports, our exports are up, to the United States, by 23 per cent this year, and they are the best among the provinces.
Madam Speaker, our economic performance is significant. It is a marked accomplishment not just for this government, but for the investors and small‑business people of our province. I would hope the member would share in the elation we feel about those facts.