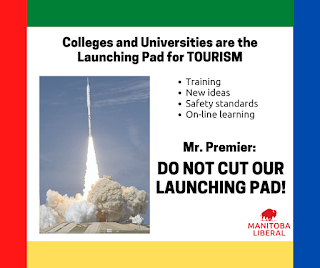 Success in tourism needs attractions which people want to visit.  In this we need to be good stewards of our resources.  As an example, Lake Winnipegosis was at one point recognized as a really important lake for fishing and for tourists to come to fish.  I believe there were, at one point, about 38 fishing lodges around Lake Winnipegoss, and it was a prime location for people from the United States to come as tourists to fish.   But sadly the fisheries on Lake Winnipegosis had poor stewardship under a succession of NDP and Conservative governments in Manitoba.  The result was the fishery went down hill, to the point that the Lake was named by an international organization as one of the worst managed fisheries in the world.  For many years, few tourists have come from outside of our province to fish on Lake Winnipegosis.  It is an illustration of why it is really important to have excellent stewardship of our resources using the best of science (much coming from universities and colleges) and traditional knowledge.

Success in tourism depends on being able to develop products and services which attract tourists.  This is often not an easy task.  But tourism today depends not only on having something worthwhile to offer for tourists to visit and to see, but also on having it well presented so it is alluring and attractive.

Success in tourism depends on being able to market our products well.  Excellence in marketing is critical.

Success in tourism in today's COVID-19 haunted world depends on being able to assure people that we can create safe places and safe ways for people to come and to visit.  There are quite a number of opportunities where we can make adjustments to ensure the safety of tourists and the safety of Manitobans.  There are some types of tourism where people will be spending most of their time physical distancing.  This would include fishing and bird watching as an example.  We would need to make sure that things are safe all the time, not just most of the time.  There are places which are great to visit where we can make modifications so that people can visit while practicing safe physical distancing.  This might include the Canadian Museum for Human Rights, the Manitoba Museum, the Winnipeg Art Gallery and the Assiniboine Park Zoo.

Success in tourism in today's COVID-19 haunted world will also need close working with health professionals in making decisions about who will be allowed to come as a visitor to Manitoba.
For example, it may be that we decide that only people who have already developed antibodies to COVID-19 would be allowed to visit, because such people are immune and should not either get or transmit the virus.   We would have to be certain that this approach would work - which means building the science base and the testing base and the communication approach to implement such an approach.

All the above will need many people who are trained in these areas, and such training is primarily done in colleges and universities.   A number of years ago I was visiting in Calgary with people at their university.  I was told about an excellent program that they had developed to train graduate students in tourism.  It had been amazingly successful in improving tourism in Alberta.  The graduate students were able to come up with wonderful and creative ideas which were very useful in helping individual businesses.  The people working in the tourist industry were very pleased to have graduate students working on local projects and enhancing tourism in the province, and it gave people in the industry a feeling that they were important. It also gave graduate students access to jobs after graduation working in the tourism industry.   It moved tourism in Alberta to a new level.  It is one example of the tremendous potential benefit for investing in colleges and universities.  It is an example of why universities and colleges are so important.  It is an example of why investing in funding graduate students could be so important to the preparation for the re-opening of tourism in Manitoba after the COVID-19 pandemic is over.

Manitoba Liberals say  to Mr. Pallister "Do not cut funding to Universities and Colleges."
For our recent press release click on this link.