On Friday, April 17, Dougald Lamont and the Manitoba Liberals outlined an approach which will allow Manitoba and our municipalities to move forward in a more positive way without having the destabilizing Pallister cutbacks.  Our press release is below:
WINNIPEG - Dougald Lamont, Leader of the Manitoba Liberal Party and MLA for St. Boniface, says the Federal Government can avoid austerity and stabilize the economy by having the Bank of Canada directly provide financing to all three levels of government.
Lamont pointed to the example of the UK, where The Bank of England has started financing the UK government's operations to help cope with the downturn due to the COVID-19 pandemic. A number of prominent economists, including Nouriel Roubini, Mariana Mazzacatto, and the Financial Times have all endorsed having central banks directly provide funding to governments. The Financial Times and others have pointed out that it means lowered borrowing costs.
Lamont said there is no need for the Pallister Government's threats of deeper layoffs and cuts, or refusal to assist small businesses. Under a direct financing plan, provinces and municipalities would cover their costs and even increase investments in order to rebuild the economy after the pandemic passes.
Lamont said the Bank of Canada should:
• Buy some of Manitoba Hydro's debt to ensure the Crown Corporation stays solvent, public and can keep electricity prices low
• Lend directly to provinces and municipalities to prevent public sector layoffs, and ensure governments have resources to help small business
The Bank of Canada is already buying old federal, provincial and municipal debts - but from investors, and not directly from governments.
"People are afraid of COVID's impact on the economy. But let's be clear, there is no need for brutal austerity and cuts, no need for massive foreign loans, and no need for massive tax hikes if we follow the example of the UK and borrow from ourselves," said Lamont.
Pallister and all the Premiers have written a letter asking the Federal Government to "co-sign" their debt. Lamont says the Premiers' request doesn't go far enough and that direct Bank of Canada financing needs to be considered to keep borrowing costs low.
Lamont says that while the Province of Manitoba has done virtually nothing except offer deferrals and loans, the Federal Government has announced many programs that will help - but much of it is loans, deferrals and bailouts for the financial sector.
While millions of Canadians are out of work and thousands of small businesses are facing insolvency, Canada Mortgage and Housing (CMHC) is giving Canada's banks $150-billion, and the Bank of Canada is buying $200-billion bonds to keep bond prices higher and banks can keep lending.
Lamont says the Bank of Canada and CMHC's measures won't help the economy because it bails out investors and lenders - not the affected businesses and individuals.
"Governments, people and businesses all need money. But instead, the Bank of Canada and CMHC are saying, 'well, we gave $350-billion in free money to banks, borrow it from them.' What we are saying is give people, small businesses, farmers and governments the money, let them pay the banks." 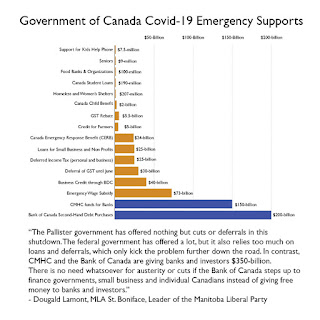