The Chief who saved his village in the influenza epidemic of 1918.

This is a story of a small village called Syatiminda in Africa in what was then Northern Rhodesia and is now Zambia. This village was located not far from the village of Kanchindu in the valley of the Zambesi River.

The homes at the time were similar to the one shown in the photo below which was taken in Kasenga another village in the region.  The photo was taken a little more than a decade after the time of the 1918-19 pandemic in the 1930s. 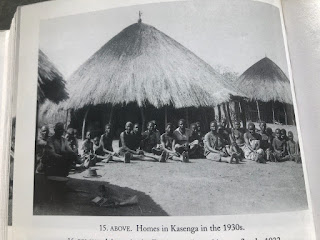 As occurred elsewhere in the world during the pandemic of 1918-1919, communities in Northern Rhodesia were devastated by the pandemic with many people being infected and with many lives lost.  There was an exception in the village of Syatiminda.

Here the Chief, whose  name was Chief Syatiminda (also spelled in one reference Siatwinda), felt, perhaps prompted by the local government, that the virus was transmitted inside the homes where people were very close together.  He decided that the best option was to keep people outside their homes during the day.  He felt that his people would be healthiest if they were outside and that they were protected by being outside and healthy.   He therefore mandated that everyone in the village had to leave their homes at sunrise and not return until sunset.

Remarkably, the village largely escaped the ravages that were being experienced in many other nearby villages at the time.

My father used to tell me the story of this village and what had happened.  He was a good observer and a good recorder of details.  He was two years old in 1918 and survived the epidemic in Kasenga at the time.  When he was 16, he returned to Zambia (Northern Rhodesia then), in the summer of 1932, visited the community of Syatiminda and met Chief Syatiminda.  He made the following observations in his diary written at the time:

“At Syatiminda, the name of a chief and also his village, we paused to see the chief.  He is a very notable man and very progressive.

During a flu epidemic [1918-1919] he gave orders to the effect that nobody was to be inside their huts from sunrise to sunset. He also prepared a medicine from the sap of the baobab and only 2 small children died.  This is extraordinary when in many cases, whole villages were wiped out by the epidemic.”


My grandfather and grandmother were in the village of Kasenga during the time of the 1918-1919 pandemic.  My grandfather was a physician and he was in Kasenga as a medical missionary.  He helped people in Kasenga and in the nearby villages and would, I am sure have talked to my father about what had happened during the pandemic.  So my father's observations would have been backed up by the information he had gathered from my grandfather.

It is paradoxical that today we tell people to stay home during the current pandemic, and Chief Syatiminda kept people healthy by ordering them to go outside. Perhaps part of the reason for the difference is that when people were outside in 1918-1919 they not only kept healthy, but they also were more physically separated than they would have been if they had stayed inside.

It is also important to point out that even during the present epidemic, the general advice has been to go outside to get exercise, but to do it safely by ensuring physical distancing.  A CBC report  by Stephanie Hogan on March 25th provides good advice on how to go outside and get some exercise during the covid-19 pandemic.  You can find it by clicking on this link.

As a final comments, I do know that my father was influenced enough by Chief Syataminda's story so that for the rest of his life he recommended and practiced getting outside for fresh air and exercise every day - and he lived until he was two months short of being 97 years old.