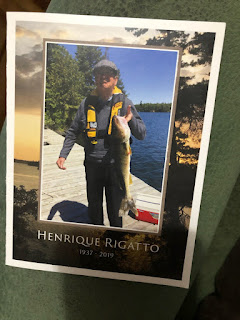 Sunday September 15, I attended a celebration of the life of Dr. Henrique Rigatto.  Dr. Rigatto was a colleague who worked at the Children's Hospital in Winnipeg for many years.  He came to Winnipeg from Brazil in the early 1970s, established the neonatal intensive care unit, and did extensive clinical and basic research which looked at the mechanism by which the brain controls breathing and how such control develops in utero and after birth.  His research was world leading and helped greatly in the understanding of how breathing is controlled very early in life.  As part of his work in the neonatal intensive care unit with newborn babies he helped develop the newborn transport team which was able to bring many sick infants from all over Manitoba to Winnipeg to get help.  In 1986, recognizing that the time for transport of an infant is critical he was successful in urging the province to get a jet airplane which could land on the small northern runways to reduce the time it took to get the infant to Winnipeg and to help ensure the best care possible for these infants.  The jet plane made a dramatic difference and was instrumental in helping improve the chances of many children doing well.