Manitoba Liberals continue to focus on our Environment 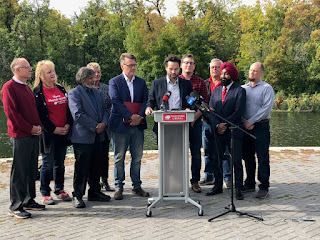 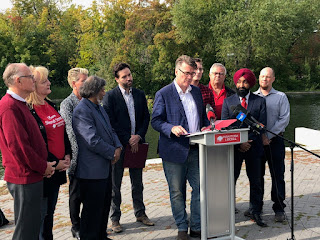 Earlier today, Craig Larkins and Dougald Lamont emphasized our Manitoba Liberal plan to continue to put an emphasis on the environment - recognizing that addressing climate change needs to be an urgent and major priority, and that moving to phase our single use plastics is needed.

WINNIPEG - Manitoba Liberal Leader Dougald Lamont was joined by Craig Larkins, Manitoba Liberal Candidate for Fort Garry, to say that on the first day of returning to the legislature, Manitoba Liberals will reintroduce their resolution to declare a climate emergency and a bill that will phase out the use of single use plastics in Manitoba by 2025.

Manitoba Liberals have been fighting for our environment in the Legislature for over a decade.

“I was so proud to work on this plan and resolution with the Manitoba Liberal team during the previous session. I would be honoured to bring it back to the floor and ensure that Manitoba is taking serious action on Climate Change,” said Larkins. “The Climate Crisis is the defining moment of our generation, and our first day back we will move to make a difference.”

The Waste Reduction Amendment Act was introduced by Liberal members in 2009 and then enhanced in 2019. It requires the government to create a plan to phase-out the use of single-use plastics and polystyrene foam containers in Manitoba by 2025.

The resolution will seek to declare that Manitoba is in a climate emergency, which requires the Provincial Government commit to meeting emissions reductions targets under the Paris Agreement.

The Manitoba Liberal Party has the boldest green plan of any party in the election, with concrete commitment to making Manitoba carbon neutral by 2030 — 20 years before the NDP.

The Manitoba Liberal Plan for Green Growth and Renewal sets out ambitious but realistic steps for a greener Manitoba by renegotiating a Manitoba green plan with the Federal Government to take back control, investing in wilderness restoration, electrifying provincial transportation and the power grid, and making it easier for Manitobans to go green.