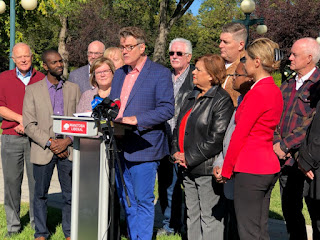 Early today, near the Manitoba Legislature, Dougald Lamont spoke of our plan for growth and change and provided the full costing of the plan.   His speech today is below:

Thank you for coming today everyone.   We’re here on Treaty One land, the traditional lands of the Anishnaabe and the homeland of the Metis Nation

We’re here today to release our costed platform for the Manitoba Liberal Party.  It is different from all the other parties, for a number of reasons.  One is that it is focused on growth.

The PCs have said, over and over, that the NDP left a mess. They did. but the financial mess created for Manitoba was also left by a federal Conservative government that starved Manitoba of funds for more than ten years.

I do not just oppose austerity and cuts because of ideology.   I oppose them because all of the evidence is that austerity does not work.

Manitoba’s financial problems were not caused by spending too much on insulin and cystic fibrosis medication. Yet that’s what Brian Pallister cut.
Manitoba’s deficit wasn’t caused because we were spending too much money on physiotherapy to help people recover from surgery, or helping mothers to feed their newborns.

Manitoba is facing the worst economic growth in twenty years, and the conference board of Canada made it absolutely clear it is because the Pallister government froze education and health programs and cut infrastructure investments.  There’s an expression. You reap what you sow. If you sow nothing, you reap nothing.

We also set out to craft a platform that addresses, in a serious way, major problems in Manitoba that have been ignored for years or decades.

Because we have so many broken systems, it takes more time, effort and investment to take care of it all.   And because they’ve been ignored so long, people have come to accept that nothing will ever change, and that all politicians are the same.

We are offering a bold plan to tackle the big issues, and we have the numbers to show we are serious about it.  The NDP and the PCs alike are making promises they clearly have no intention of keeping, because when you drill down into the details or the dollars, the commitment just isn’t there.

If you look at the NDP’s promise on child care, it will take 30 years to eliminate the wait list. It will take us four.

If you look at the NDP’s promise on climate change, it will take 30 years for Manitoba to become carbon neutral. It will take us ten. The PCs will never do it.

Manitoba Liberals are the only party that is not offering Brian Pallister a tax cut. The PCs, NDP and Greens are all offering tax breaks to high-income individuals while committing to more cuts - even after years of cuts and freezes under the PCs.

The NDP costed platform proposes $229-million in cuts over four years. The PCs plan offers more freezes and cuts of 15% to crown corporations, while the Greens also favour privatizing alcohol.

We will begin investments immediately, with $1.4 billion invested in the first year to repair services and infrastructure that have been left neglected for decades. While some returns on these investments will take time to be implemented, returns will surpass expenditures in 3 - 4 years.

These investments will reduce costs, in the same way insulating your house does.  Manitoba is like a drafty house that needs maintenance, where the heating bills are high because there’s no insulation. We can save money two ways. Mr. Pallister’s solution is to save money by turning off off the heat, and save money by having everyone freeze. You save money, but it will never get better.  The Liberal solution is to invest and insulate the house, save money on heat forever, and be warmer at the same time.

Those same people who say we have to keep cutting somehow managed to find $200-million to bail out the bombers stadium. We should stop listening to them.

This document shows that our platform commitments and promises are affordable and reasonable.

I will say - if there is a downturn or a global recession, there could be changes to the costing - BUT - that every measure in this plan should proceed anyway, because it will build a new foundation for Manitoba’s economy as well as a healthier environment for all of us.

There is also more to good government than financial management alone.  We need real accountability. That has not existed in Manitoba for a long time.   Manitoba Liberals will introduce long-overdue conflict of interest legislation and create an Independent Conflict of Interest and Ethics Commissioner with powers of investigation and sanction. The Commissioner would be able to investigate conflicts of interest as well as harrassment independent of political considerations.

I will quote what the current Conflict of Interest Commissioner said - that ‘Manitoba has the oldest and arguably weakest conflict of interest laws in the Canada’ - and on the first committee meeting I ever attended, the PCs tried to orchestrate his dismissal,” said Lamont.

“The era where Brian Pallister and his MLAs get to mark their own homework must come to an end, for the sake of the public interest and the people who work in politics alike.”   We are offering a clear choice in this election.

The NDP and PCs alike are offering more of the same - and showed it in their campaigns, where they were more focused on calling each other names than on getting anything done for the rest of us.

There are US states where they’ve tried what Pallister is doing - cutting health care and education so they could lower taxes and attract new businesses. But businesses left because workers didn’t have the training, and were too sick to work.

We keep hearing from Manitobans - they want an option that is an alternative to the same-old, same-old, NDP/PC status quo, where the only reason parties complain about their opponents is because they are not in power.

The NDP and the PCs still seem to think they are the only parties entitled to power in Manitoba. We know that the Manitoba Liberals are not entitled to govern. We have to earn it.  At the Manitoba Liberal Party, we sure don’t want the status quo.  We know we will have to earn trust, and every single vote, and every single seat.  We know that we will have to prove ourselves to Manitobans at every step.

We have to let people know - person by person, conversation by conversation - that the Manitoba Liberal Party is committed to disrupting politics in Manitoba for the better.
We want Manitobans to know that they don’t have to hold their nose and vote for a party they don’t really want, to keep out a party that is even worse.

Manitoba Liberals are offering a New Way Forward - and government that works, for all Manitobans.