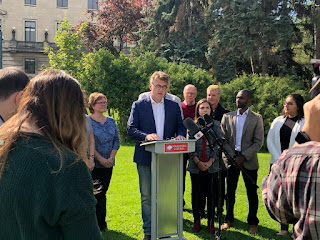 Wednesday September 4th Dougald Lamont announced our Manitoba Liberal plan to strongly support a National Pharmacare plan.   In his announcement speech, Dougald Lamont mentioned a critical issue - that about 10 per cent of people are currently not taking their prescriptions because they can not afford them.  When people are unable to take their prescriptions they may get sick and need to be in hospital, so there is a big cost saving in hospital care by ensuring everyone is able to get their prescription.  Indeed, I am aware of one individual in this circumstance who became critically ill and ended up in a hospital for months.  Dougald Lamont specifically committed to ensuring that the Liberal approach to pharmacare will ensure there everyone will be able to get  the prescription they need.  The Liberal announcement is below.

Opting In: Manitoba Liberals Pledge to Fight for National Pharmacare Program
Winnipeg – Manitoba Liberal leader Dougald Lamont announced ‘Part One’ of their plan to invest in prevention by announcing that a Liberal Government in Manitoba would fight for a National Pharmacare program and partner with any government that introduces one.
“Brian Pallister has been working in lockstep with federal conservatives to obstruct investments in everything from health to the environment, and there is every reason to believe that Brian Pallister will tow the Conservative party line and undermine national pharmacare as well,” said Lamont. “A Manitoba Liberal government will be a champion and a partner with the Federal Government in making universal drug coverage as part of medicare for all.”
In June, Advisory Council on the Implementation of National Pharmacare released a report outlining the need for a National Pharmacare Program and requirements for provinces to sign on. In July, Conservative leader Andrew Scheer delivered a speech in Saskatchewan opposing pharmacare.
Manitoba Liberals would opt in to national pharmacare by agreeing to the national standards and funding parameters. The program would be funded by a federal government funding transfer — ensuring no new costs to Manitoba’s health care system.
National Pharmacare will mean that employees and businesses no longer have to pay for prescription drug coverage. In addition to major savings from bulk purchases of medication for governments, the proposed National Pharmacare Program would save Manitobans over $121-million a year — an average savings of $350 per family per year.
Manitoba Liberals say Pallister has already shown a pattern of obstruction and delays to programs he ideologically opposes, even when they benefit Manitobans. Aside from reversals and lawsuits, Pallister has refused or delayed more than $1.9-billion in federal funding for health, housing, and infrastructure — while cutting or freezing all three.
Pallister has called for a “Grand Bargain” on health care that calls for the federal government to entirely abandoning any role in health care — a policy shared with PPC leader Maxime Bernier.
Liberal MLA Cindy Lamoureux, who is running in Tyndall Park and has been Seniors’ Critic for the Manitoba Liberals, has been a long-time advocate of pharmacare.
“The Federal government needs pressure, but it also needs provincial partners who will join in the fight for pharmacare,” said Lamoureux. “We have been hearing from seniors and families across Manitoba that they are struggling to afford their medication, and a Manitoba Liberal Government will stand by them.”

Backgrounder
Details about the National Pharmacare Proposal
One in five households reported a family member who, in the past year, had not taken a prescribed medicine due to its cost.
Of the 3 million people who could not afford their medications, 38 per cent had private insurance coverage and 21 per cent had public coverage but it did not cover enough of their costs.
According the proposal, the full comprehensive national formulary would be in place no later than January 1, 2027.
Drugs on the essential medicines list would carry a copayment of $2, while all other drugs would have $5 copayments. People receiving social assistance, government disability benefits or the federal Guaranteed Income Supplement benefit would all be exempt from copayments. No person or household would pay more than $100 per year.
Since the average Canadian household spends about $450 annually on prescription medicines, the council’s proposed $100 cap on out of pocket spending means Canadian families will save, on average, $350 per year.
The average business owner who provides drug benefits would save over $750 annually per employee. The average worker with workplace drug benefits would save over $100 per year in plan premiums. In addition, employees who pay hundreds or thousands of dollars per year in copayments, coinsurance or deductibles for themselves and their families would never pay more than $100 per household per year. No more coinsurance. No more annual or lifetime limits.
(Excerpts from the Final Report of the Advisory Council on the Implementation of National Pharmacare - 2019)