April 20, 2018
On April 17, I spoke on a resolution on education put forward by Matt Wiebe, the MLA for Concordia.   The resolution stated: "THEREFORE BE IT RESOLVED that the Legislative Assembly of Manitoba urge the provincial government to immediately reverse the cuts to K-to-12 and post-secondary education, which have failed Manitoba students, in order to ensure every student has access to affordable, quality education."


My speech, from Hansard, is below:

Hon. Jon Gerrard (River Heights): Madam Speaker, let me say a few comments on this resolution.
First of all, we had a government which talked about aiming higher when they came in, and they appear to be, if anything, [to be] aiming lower. There is no evidence at this point that there is really a plan to address the problems which have been mentioned in  terms of the lower graduation rates, in terms of  the skills that the member for Swan River (Mr. Wowchuk) was talking about, the skills deficit. Where are the plans to actually address and improve these areas? I see no vision, no plans; it's sad.
Instead of developing plans, this government picked an argument with the Manitoba Teachers' Society. Instead of working with teachers to find  ways to improve education in Manitoba, the government members are resorting to rhetoric over substance, and we are not seeing the improvements that we should see.
This government has cut support for French-language education in Manitoba at a time when it [enrollment in French-language education] is increasing. We await for the plans to address the educational issues in indigenous communities. I'm glad that the federal government is making some progress here, but I don't see the province paying much attention to this.
In post-secondary education, we have been seeing cutbacks in funding to our post-secondary education institutions. We're seeing increases in tuition fees. We've seen the elimination of the tuition  rebate. We've seen the health coverage for international students being taken away. And I should add that these are students who have come here–I've been hearing from graduate students–they came here to make a contribution, to add to the body of knowledge and research on scientific and social science as well as physical sciences. And, certainly, there is an opportunity to welcome these students instead of to say, oh, we're just going to make you pay more if you come here. I think there would have been a much better way, a much better understanding of the importance that these students are playing in research and innovation, if they're grad students, bringing ideas and bringing their knowledge and their expertise from around the world to contribute here in Manitoba. And this is a government which is saying, no, no, we're not so interested in you. We're just going to cut back on the support for your health care while we're here. It's sending the wrong message, Madam Speaker.
I do appreciate the government's recent attention to talking more about addressing bullying and harassment and sexual harassment. This is a remarkable change from a government [of] which many members who were in opposition not very long ago fought tooth and nail against a bill to bring in measures to reduce bullying in schools. And I'm glad that there's a more focused awareness.  We have heard from all sides of the Chamber in recent years of the need to do more. And I'm glad that the government members are at least moving in the right direction in this area.

I will conclude my remarks, Madam Speaker–thank you, merci–so that there can be a vote on this resolution. And I hope all members will support it. Thank you.

The resolution was talked out.  It did not pass.

Also, with regard to Education in Manitoba please note our upcoming Forum.  It is an open public forum and there is no cost to attend. 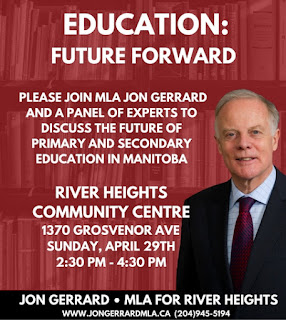