Raising concerns about the cuts to science and math teaching and to the cooperative education program at the l'Université de St. Boniface 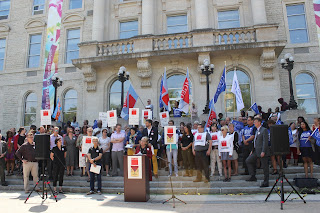 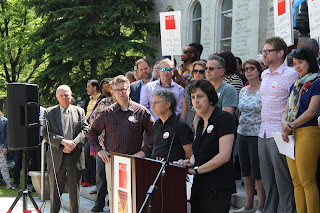 Université de Saint-Boniface - Funding Concerns
Hon. Jon Gerrard
(River Heights): Madam Speaker, enrollment in French immersion across Manitoba has been exploding and there's a shortage of qualified French teachers, including in math and science. We should be investing in education and our future, but instead this government has cut budget. French, math and science positions are being cut and co-op programs closed, while tuition goes up. There is always a gap between what this government announces in its budget and what it actually delivers: cuts that undermine our province's youth and our future.
Why has the Pallister government reduced the budget for l'Université de St. Boniface resulting in these cuts to services.
Hon. Brian Pallister (Premier): Il n'y a pas de réduction de financement au Bureau de l'éducation française.

May 12, 2020
More than I month ago, I was approached by Tara St. Laurent.  Because of her disability she is unable to work and is on EIA.  But she loves volunteering when she can with the Winnipeg Human Society.  When the Covid-19 pandemic hit and Manitoba went into lockdown, she was no longer able to volunteer as before.  She missed the $100 benefit which was critical for her to be able to purchase her food to eat.  She asked me if there was a possibility of seeing if she could still get the benefit.  I wrote a letter to Heather Stefanson the Minister of Families to make this request and she said yes.  However, actually getting the benefit took some time, and a direct intervention with Tara's worker to ensure she got the benefit, which she is now getting.  I had expected that Minister Stefanson would notify other EIA recipients who have been volunteering that they are eligible for the benefit.  Sadly, this did not happen, so the availability of this benefit has been largely unknown.   When I
Post a Comment
Read more